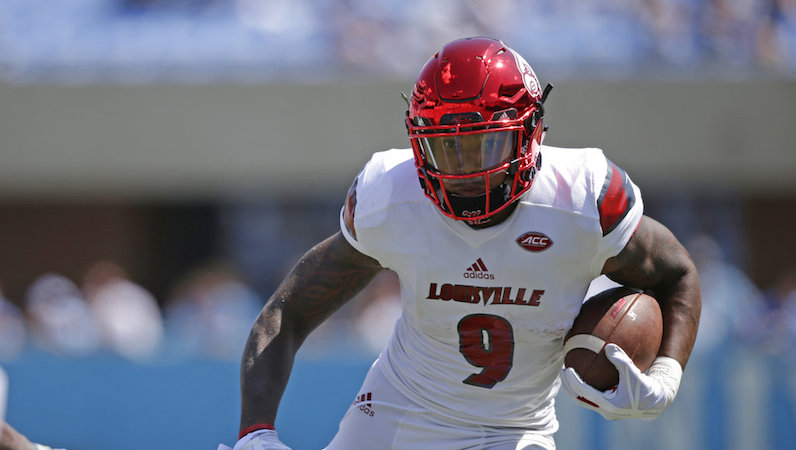 The Atlantic Coast Conference Football Players of the Week have been recognized following their performances in week two of the 2017 season.

Jackson became the second player in FBS history to record at least 300 passing yards and 100 rushing yards in consecutive games during Saturday’s 47-35 win over North Carolina. Jackson’s 525 yards of total offense were the most ever allowed by the Tar Heels and is the eighth most in ACC history. He accounted for six touchdowns (three passing, three rushing). With 132 yards rushing, Jackson boasts 2,770 for his career and ranks fourth on Louisville’s all-time list. Following his 393-yard passing performance on Saturday, Jackson’s career total of 6,154 yards through the air ranks sixth all-time in school history.

Lisle led the blocking for a Duke offense that amassed 538 yards and 34 first downs, converted 15-of-22 (.682) third-down snaps and held possession for 41:18 in Saturday’s 41-17 win over Northwestern. Lisle was part of an offensive line that protected quarterback Daniel Jones, who completed 29-of-45 passes for 305 yards and two touchdowns. He opened holes for a Duke rushing attack that amassed 233 yards and three touchdowns, including a 108-yard, two-touchdown performance by Jones.

Smith recorded his third-career and second-straight 100-yard receiving game in the Cardinals’ win at North Carolina. He finished the contest with nine catches for 183 yards and one score. His 300 receiving yards are the most by a Louisville receiver in the first two games of a season, surpassing the 251 by Harry Douglas in 2007. Smith’s touchdown versus the Tar Heels came on a career-long 75-yard reception. His 183 receiving yards are the most by an ACC receiver in a game so far this season.

Bryant had four sacks to tie a Clemson record and had seven tackles overall in the Tigers’ 14-6 win over Auburn. He became just the third player in school history with four sacks in a game. Bryant led a defensive line that held Auburn to just 117 yards of total offense and just 38 yards rushing on 42 attempts. Bryant was named National Defensive Player of the Week by the Walter Camp Foundation on Sunday.

Bassey had five tackles and an interception return for a touchdown in Wake Forest’s 34-10 win at Boston College on Saturday. Bassey’s pickoff and touchdown return came with 1:36 to play in the second quarter and Wake Forest holding onto a 14-7 lead. The interception led to Wake Forest’s 21-7 halftime lead.

Ratliff-Williams returned five kickoffs for a school single-game record 199 yards – an average of 39.8 yards per return – in Saturday’s loss to No. 17 Louisville. Among the five returns was a 94-yard touchdown in the third quarter, Ratliff-Williams’ first career scoring play.

Making his first career start, Surratt completed 12-of-14 passes for 168 yards and two touchdowns, all in the first half of Saturday’s loss to No. 17 Louisville. The redshirt freshman hit Brandon Fritts for a pair of scores – a 1-yard touchdown pass in the first quarter and a 5-yarder in the second quarter.