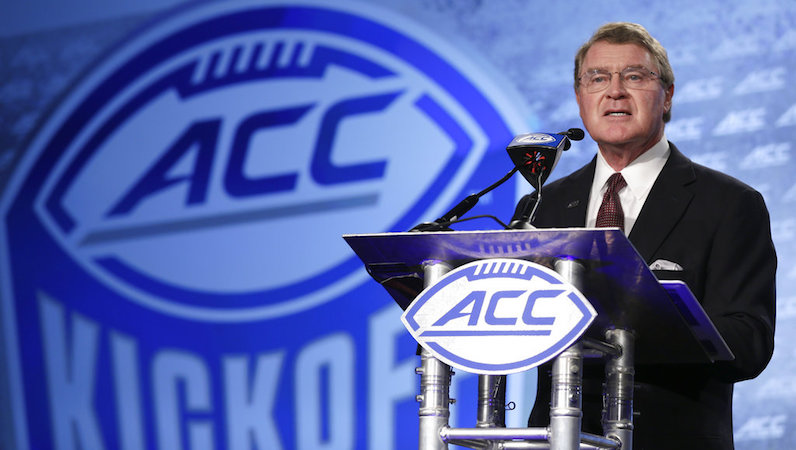 ACC commissioner John Swofford helped launch the league’s annual football media event with his own press conference. A variety of topics were discussed, but one of the more notable talking points was the discussion of the launch of the ACC Network.

Swofford spoke about the success of the ACC Network Extra — the league’s live digital platform, which debuted for the 2016-17 season.

“A lot of people made that extremely successful this year. We’re grateful to those many individuals, both on our campuses and with our partners at ESPN, who helped produce and distribute over 1,450 events last year. That far exceeded our goal of 600 events, so a tremendous first year in that way.”

The ACC has a lot of ground to cover in the next 24 months for the launch of the league’s linear network. Swofford added that work for the ACC Network is taking place in a variety of locations: “Activity is on our 15 campuses. It’s at our offices in Greensboro. It’s at ESPN campuses in Bristol, as well as here in Charlotte, as we prepare for the launch in just 24 months.”

As Swofford mentioned, the league’s partnership with ESPN is crucial for the development of the linear network:

Preparing to produce and distribute over 1,500 events between the linear and digital networks requires a lot of planning and preparation and obviously some lead time to do it right and launch it in the way we want to launch it. ACC and ESPN teams are diligently working to complete the multiple tasks that are required for the launch, and we’re extremely pleased with the progress. And not only pleased with the progress, we’re, as a part of that, right on schedule. And in several instances, slightly ahead of schedule in the various phases of the network operations and buildout.

For more information on the ACC Network, make sure to read David Teel’s fantastic story from last month on how Virginia and Virginia Tech are preparing for its lanch.