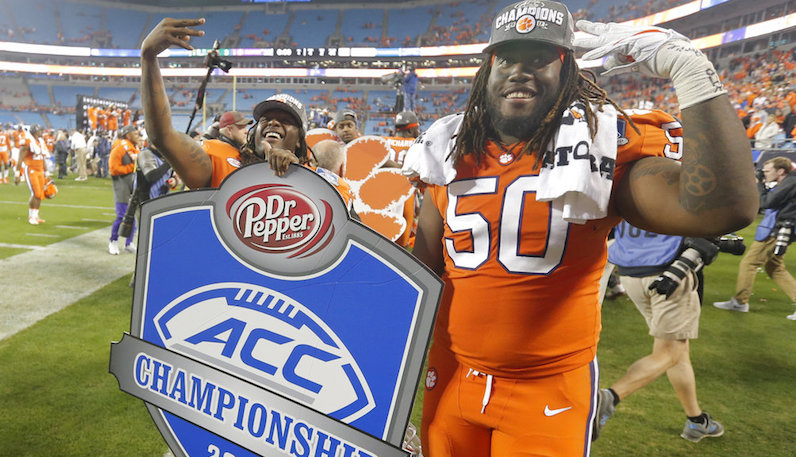 With Clemson’s invitation to the College Football Playoff, the ACC joins the SEC as the only Power 5 conference to send a team to the CFP all four years of its existence. The ACC is the only league with two national championships over the past four seasons. Clemson provides a chance for a third title in five seasons.

The ACC also won eight non-conference games in 2017 against Power 5 opponents — more than any other Power 5 conference.

The ACC played more out-of-conference Power 5 games than any other league — 17 — which partially explains the higher number of wins. But it’s also a testament to the willingness of programs throughout the ACC to beef up their schedules with top-flight opposition.

The only ACC-Pac-12 matchup of the 2017 season was Cal’s victory over North Carolina in Kenan Stadium in the season opener.

The Big Ten also had a winning record in out-of-league Power 5 games (7-5, 58.3 percent). But only two of the Big 10’s seven wins came against ACC opponents — Indiana’s win over Virginia, and Penn State’s triumph over Pitt. Louisville defeated Purdue, and Duke knocked off Northwestern, to give the ACC and Big Ten a 2-2 stalemate in four matchups.

The ACC went 4-5 against SEC foes, aided primarly by Clemson’s pair of victories over Auburn and South Carolina. Louisville blew out Kentucky, and Florida State defeated Florida on the final regular season weekend, for the ACC’s other two SEC triumphs. Two of the ACC’s four SEC losses were Florida State and N.C. State’s setbacks to Alabama and South Carolina, respectively, on the opening weekend. The others were Georgia Tech’s Labor Day loss to Tennessee, Syracuse’s late September loss at LSU, and Georgia’s regular season finale blowout over Georgia Tech.

Against the Big 12, the ACC produced a 2-1 record, with Duke beating Baylor, and Virginia Tech taking down West Virginia. Oklahoma State buried Pitt for the Big 12’s lone win in the cross-conference rivalry.

At the conclusion of the regular season, the ACC had six teams (including 6-6 Florida State) in the ESPN Power Index Top 25 — more than any other Power 5 conference.

Louisville’s Lamar Jackson stands as the national leader in total offense at the conclusion of the regular season — 411 yards per game. Joined with Syracuse’s Eric Dungey, the ACC is one of only two conferences (along with the Big 12) to have two quarterbacks ranked in the top seven nationally in total offense. Georgia Tech ranked second nationally among Power 5 schools – behind only Arizona — in rushing yardage per game. Miami led the nation in turnover margin.

Although the ACC doesn’t quite have the national football reputation that the SEC enjoys, the league is making a strong case that it’s the second-best league, top to bottom, in all of college football.