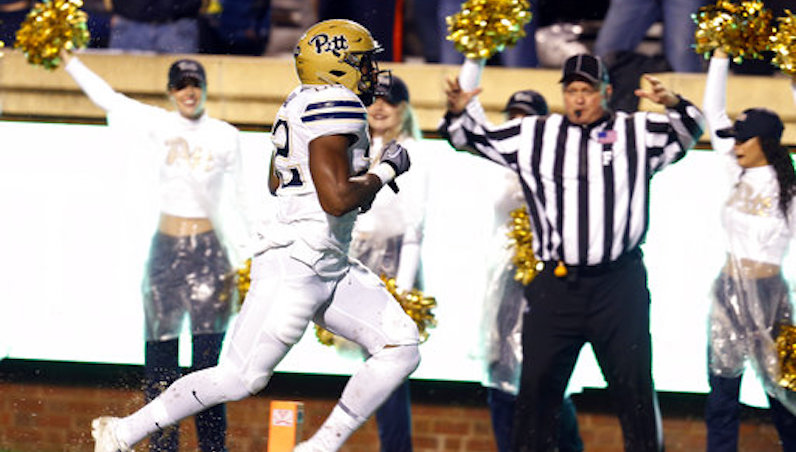 Pittsburgh running back Darrin Hall (22) crosses the goal line for a score during the first half of an NCAA college football game in Charlottesville, Va., Friday, Nov. 2, 2018. (AP Photo/Steve Helber)

The Atlantic Coast Conference Football Players of the Week have been recognized following their performances in Week 10 of the 2018 season. The selections are determined by a vote of a 15-member media panel. The following are this week’s honorees:

Blackman made his first start of the season, completing 29 passes for 421 yards and four touchdowns in Saturday’s 47-28 loss at No. 21 NC State • Blackman’s 421 passing yards were the most for a Seminole since 2013, and his completions, yards and touchdowns were career highs • Starting for an injured Deondre Francois, Blackman had thrown just five passes on the season entering the game.

Hall was also named Walter Camp National Offensive Player of the Week for his efforts in Friday night’s 23-13 win at No. 23 Virginia • Facing a nationally-ranked Cavalier defense that was yielding only 113 rushing yards per game, Hall more than doubled that total on his own • He rambled for 229 yards and three touchdowns on just 19 carries (12.1 avg.) and was not dropped for a loss the entire game • Hall’s touchdown runs covered 41, 2 and 75 yards, the last giving the Panthers a 20-13 fourth-quarter lead • The victory lifted Pitt into first place in the ACC’s Coastal Division and the Panthers scored their first road win over a ranked foe since their 2016 upset of eventual national champion Clemson.

In a return to his home state, Herndon had one of the finest games of his career in helping to spearhead Pitt’s powerful rushing attack in a 23-13 win at No. 23 Virginia • Graded out at 95 percent while surrendering no sacks or pressures and committing no mental errors • Responsible for several big blocks in the running game, including one that blew open a hole for Darrin Hall’s 2-yard touchdown run in the third quarter that gave Pitt the lead for good at 14-10 • The Panthers finished with 254 rushing yards against a Cavalier defense that was surrendering only 113 per game.

Saint-Amour set career highs with nine tackles and three quarterback hurries and made a terrific play for a game-clinching interception in Georgia Tech’s 38-28 win at North Carolina • Saint-Amour’s career-high nine tackles included one for loss • With Georgia Tech clinging to a 35-28 lead and less than three minutes to play, Saint-Amour dropped off the line of scrimmage and into coverage to make his decisive interception • Returned the interception 16 yards, which set up a 22-yard field goal that put the game out of reach with 46 seconds to go • He also had one pass breakup.

Holcomb registered a career-high 22 tackles in Saturday’s 38-28 loss to Georgia Tech • Holcomb, who was the first Tar Heel since 2007 to top the 20-tackle mark, also forced three fumbles on the day, two of which were recovered by UNC.

With the Eagles’ ACC road game at Virginia Tech tied 14-14 late in the third quarter, Sebastian made the defensive play of the game with his first career interception to give the Eagles the ball at the Virginia Tech 19-yard line • Boston College scored one play later to take the lead for good en route to a 31-21 win • Sebastian added a career-best 10 tackles.

Dunn accounted for 17 of the Wolfpack’s 47 points in Saturday’s win over Florida State • Perfect 4-for-4 on field goals on attempts from 21, 26, 31 and 38 yards • Also 5-for-5 on extra points • Field goal total was the highest for a Wolfpack player since Nikolas Sade also had four against North Carolina in 2013 • Dunn now ranks third in the ACC in scoring with 9.0 ppg • With 14 made field goals for the season, Dunn has crushed Sade’s previous school rookie record of 11 set in 2011.

Second straight ACC Rookie of the Week honor for Oliver, who came off the bench to account for 224 total yards and three touchdowns in a little more than three quarters of play in Georgia Tech’s 38-28 victory at North Carolina • Replaced starting QB TaQuon Marshall with 1:26 to go in the first quarter and finished with 120 rushing yards and two touchdowns on 28 carries and completed 2-of-2 passes for 104 yards and a score • His 86-yard touchdown pass to Qua Searcy in the second quarter was the sixth-longest pass play in school history and the Yellow Jackets’ longest since 2009.

NC State returns to the AP Top 25; Clemson sticks at No. 2