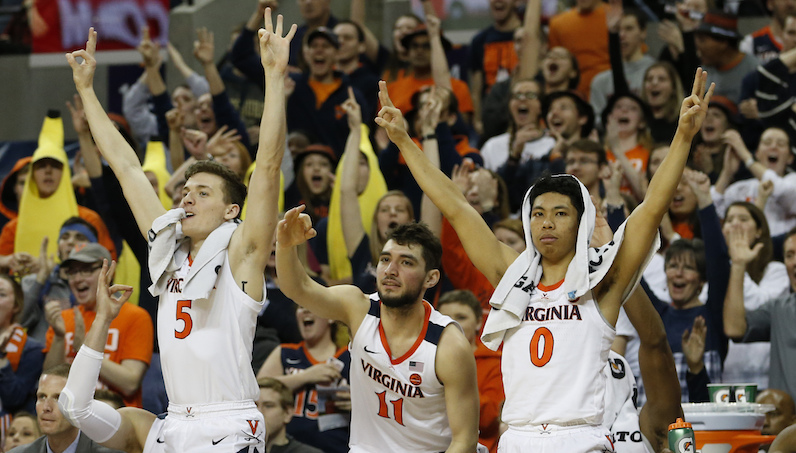 Let’s jump right in, shall we? Hurry up, before Kyle Guy hits another 3-pointer…

UVA uses monster second half to blow by Syracuse

Another game, another masterful performance from Virginia (27-2, 15-2 ACC), which defeated Syracuse Monday night, 79-53. Virginia splashed a school-record 18 3-pointers, and outscored Syracuse by 28 points in the second. Once again, the Big 3 lead the way. All 10 of Kyle Guy’s field goal attempts came from beyond the arc as the zone-buster splashed 8-of-10 3-point attempts (45.7 3P% in ACC play).

Focusing in on Kyle Guy – he scored 13.8 more points than an average shooter would have taking the same shots! A new season high for 10 shot games in my DB pic.twitter.com/FsUCxWIKyT

De’Andre Hunter was surgical, as per the usual; the future lottery pick scored 21 points on 13 field goal attempts — while blocking three shots and handing out four assists. As a team, UVA assisted on 75 percent of its field goals.

Syracuse coach Jim Boeheim said this is the best Virginia team he’s seen: “By a lot.”

Sophomore wing Curtis Haywood Jr. has played in all 29 games for Georgia Tech this season; however, he exited the team’s Sunday win over Boston College with a left ankle injury. He is out indefinitely.

Ron Wellman will officially retire on May 1, 2019; on Monday, though, the school introduced his replacement, John Currie, to the public.

The passing of a torch can be as simple as Ron Wellman pinning a Deacon head logo onto new AD John Currie, as was the scene Monday: https://t.co/0NUjeX8iaL