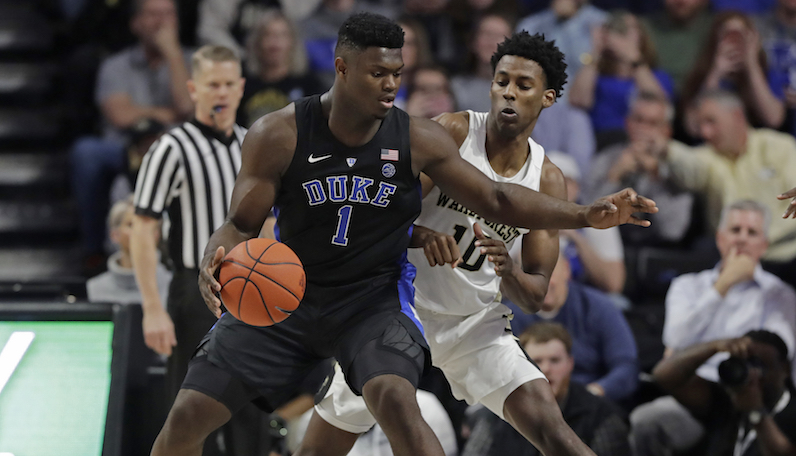 Busy times in the ACC. Let’s take a quick rundown through the conference — starting with, you guessed it, Zion Williamson.

No. 1 Duke picked up its first true road win of the season at Wake Forest, 87-65, on Tuesday night; to the surprise of no one, Zion Williamson was sensational. He continues to do nothing but reaffirm his status as the top prospect headed to this year’s NBA Draft.

First Duke freshman ever to score 30, grab 10 rebounds and have 5 assists. Ever.

At about the 12-minute mark of the second half, Cameron Johnson hit the floor while going for a loose ball and held his right leg. He was able to walk off the floor; North Carolina diagnosed the injury as a cramp, which was mostly a relief. Johnson, who has been one of the top three-point shooters in college hoops this season (49.4 3P%), spent most of what was left in the game in the locker room. He returned to the floor with about a minute left in the game, but didn’t play.

According to multiple media reports now, veteran quarterback Deondre Francois is still enrolled at Florida State. He’s still a current member of the football program, too.

Usher returns to Atlanta, will transfer from USC to Georgia Tech

No, not that Usher. We’re talking Jordan Usher, a former 4-star small forward prospect from the Atlanta area that will transfer to Georgia Tech from USC. Currently a sophomore, Usher will be eligible to play during the 2019-20 season, at the end of the 2019 fall semester.

One of the top players in the 2019 class — Isaiah Stewart, a target of Duke and Syracuse — plans to make a decision soon.