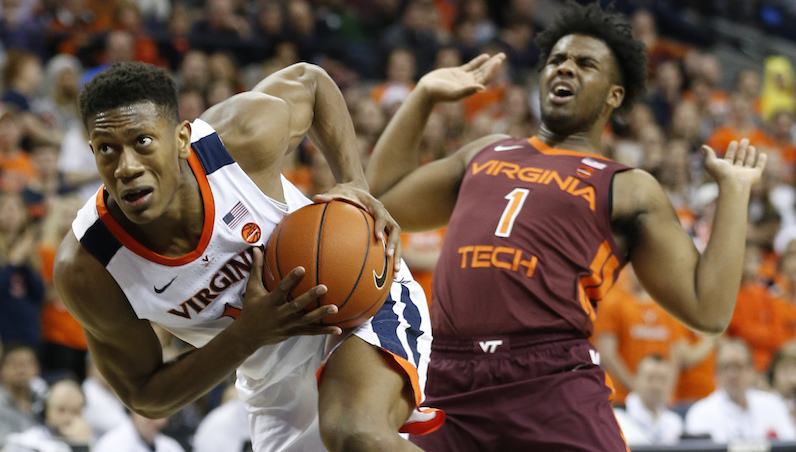 Virginia guard De'Andre Hunter (12) drives top the basket as he gets around Virginia Tech guard Isaiah Wilkins (1) during the first half of an NCAA college basketball game in Charlottesville, Va., Tuesday, Jan. 15, 2019. (AP Photo/Steve Helber)

If you’re currently celebrating a three-day weekend, enjoy it, folks. Just make sure to be in front of your screens at 7 p.m. for Virginia at Virginia Tech.

Virginia bounced back from the Duke loss with two bigs, including a road victory over North Carolina; however, the Cavs looked pedestrian on offense against Notre Dame on Saturday (0.98 points per possession). While the team slumped, De’Andre Hunter was brilliant: 20 points (11 FGA), 10 rebounds, two assists and three stocks (one blocks, two steals). Kyle Guy hit four 3-pointers, too.

On the other side, Virginia Tech picked up its second straight win on Saturday — 70-64 at Pittsburgh. The Hokies (1.11 points per possession) hit 10 3-pointers, which is great; however, this was another below-average game for Nickeil Alexander-Walker. Without Justin Robinson, Tech’s offense has slumped, and NAW has been more up-and-down: nine points (5 FGA) and three turnovers. As a team, Virginia Tech posted a turnover rate of 22.2 percent.

Two of the ACC’s top scoring guards — Chris Lykes and Ky Bowman — met on Sunday, but neither could find the range in Boston College’s 64-57 home win. Bowman scored a season-low six points on 11 field goal attempts (plus four turnovers, while Lykes went for 10 points on 15 field goal attempts. When Lykes struggles like that, it becomes incredibly tough for Miami to win a game.

For the Eagles, Jordan Chatman and Nik Popovic combined for 32 points. BC has now won two straight games heading into Wednesday’s matchup at NC State.

Great night all around at Conte Forum! 64-57 win on a night when we retired Bill Curley's jersey. Jordan Chatman joins the 1,000-point club at BC as he finished with 17 points.#WeAreBC pic.twitter.com/9IaOXhH7YM