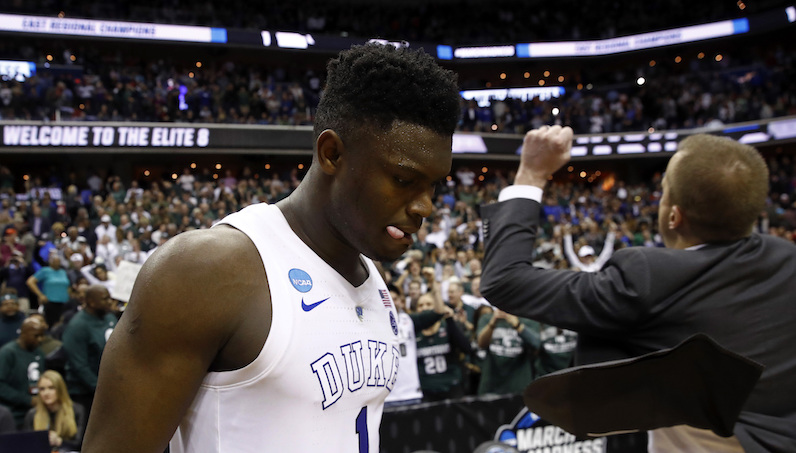 One of the most amazing single seasons in college basketball history came to a close Sunday night — as Michigan State defeated Duke, 68-67, and ended the 2018-19 campaign for Zion Williamson.

Duke’s 3-point shooting and free throw concerns reared their ugly heads in this game; the Blue Devils went just 7-of-21 from deep (33.3 3P%) and missed of five of their 13 free throw attempts. However, ultimately, this was about the defensive performance from the Spartans.

According to Synergy Sports, Williamson didn’t register a transition field goal; Duke was held to under one point per possession in this game, too.

Would've liked to have seen one more touch for Zion to close things out, like another touch on the block. (Granted, MSU was making life tough in there) Regardless, his final line is wild: 24 points (2 3-pointers), 14 rebounds (7 offensive), 3 blocks, 3 steals, 2 assists.

This was a uniquely powerful Duke team — one that relied on its interior forcefulness to remain efficient offensively while looking to overwhelm opponents with an arsenal of athletes on the defensive end. Duke’s season may have ended, but not before it claimed an ACC title, and Zion wowed the world as one of the best NBA prospects of the last 20 years.

Despite all of the soon-to-be-NBA talent on the roster, this team clearly enjoyed playing together. After the game, Mike Krzyzewski spoke on how much fun it was to coach this group.

“These guys have been an incredible group for me to coach.” pic.twitter.com/E83dHmdGmU

On Sunday in sunny Charlottesville, Virginia Basketball celebrated punching its ticket to the program’s first Final Four since 1984.

Virginia, of course, will play Auburn, which defeated Kentucky on Sunday, in the Final Four; tip-off is set for 6:09 p.m. on Saturday in Minneapolis.

Over the weekend, NC State got things started with a commitment from 3-star 2020 defensive back Joseph Johnson — a top-50 cornerback from Virginia. Less than 24 hours later, it was another 2020 cornerback — Aydan White — who pledged to the Pack. Both as top-75 cornerbacks in the 2020 class, per 247 Sports.

And in a move that should make Wolfpack fans happy, Jalen Lecque — the basketball program’s top 2019 signee — showed some support for White’s commitment on Twitter.