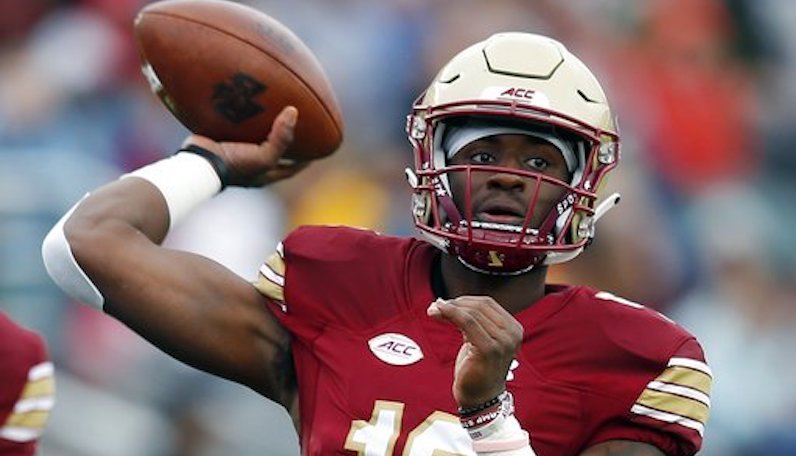 The Atlantic Coast Conference Football Players of the Week have been recognized following their performances in Week 7 of the 2018 season. The selections are determined by a vote of a 15-member media panel. The following are this week’s honorees:

Brown was efficient in leading the Boston College offense to a 38-20 win over Louisville • Threw his ACC-leading 14th touchdown pass of the season and finished the day 16-of-22 passing for 179 yards • The Eagles finished with 430 yards of total offense and scored 35-plus points for the fifth time this season • Brown picked up his second ACC Quarterback of the Week accolade of the year.

Rahming caught four passes for 91 yards and a touchdown in Saturday’s 28-14 win at Georgia Tech • Touchdown catch came on third-and-12 from the Georgia Tech 48-yard line late in the third quarter and snapped a 7-7 tie • All four receptions resulted in Blue Devil first downs with yardage gains of 11, 12, 20 and 48 yards • Became the fourth player in Duke history to reach the 200-catch plateau for his career (now has 202).

Lindstrom earned his second ACC Offensive Lineman of the Week honor of the season following his performance in a 38-20 win over Louisville • Was the top-graded lineman for Boston College, paving the way for an offense that totaled 251 yards on the ground as two backs went over 100 yards rushing (Ben Glines and David Bailey).

Allen was all over the field with seven tackles, including three for loss and a sack in Boston College’s 38-20 win over Louisville • The Eagles allowed a season-low 217 yards of total offense and held the Cardinals to 47 rushing yards on 32 attempts, the fewest rushing yards by a BC opponent in 2018 • The Eagles finished with seven sacks and 12 total tackles-for-loss in the win.

Thornhill also earned Walter Camp Defensive Player of the Week recognition for his performance in Saturday night’s 16-13 upset of No. 16 Miami • Made six tackles and intercepted two passes • Recorded 86 return yards on his two interceptions, including a career-long 62-yard return that set up a touchdown in the second • Second ACC Defensive Back of the Week honor this season for Thornhill, who now has 10 career interceptions.

Ffrench opened the second half at No. 5 Notre Dame with a 99-yard kickoff return for a touchdown, staking the underdog Panthers to a 14-6 lead • It was the second kick return TD of the season for Ffrench, who had a 91-yarder for a score in the opener versus Albany • Became the first Pitt player to have multiple kick return touchdowns in a single season since All-American Quadree Henderson had a school-record three in 2016 • Ffrench is tied for the national lead in kickoff return TDs • The two-time ACC Specialist of the Week also leads the ACC and ranks second in the country with a 33.8-yard kickoff return average.

In his first career start, Rumph recorded four tackles – including four tackles for loss and a sack – in Saturday’s 28-14 win at Georgia Tech • Also had a fumble recovery with 2:41 left in the third quarter and the score tied at 7-7 to set up Duke’s go-ahead touchdown • Had two fourth-down tackles resulting in change of possession • Matched the Duke single-game record for TFL by a freshman.