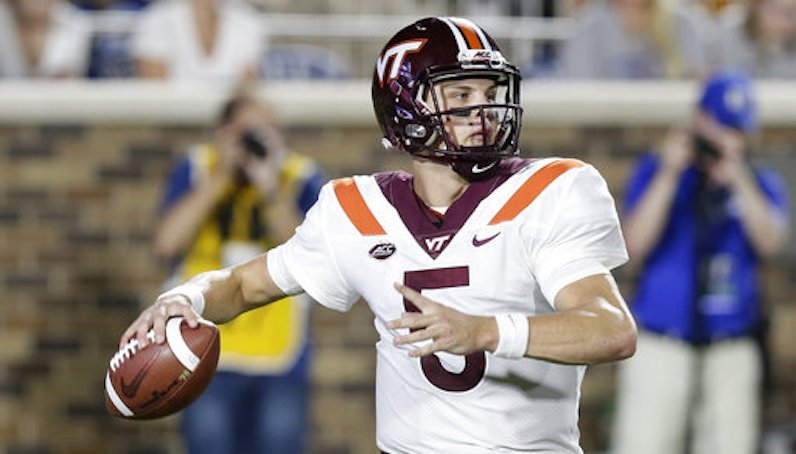 The Atlantic Coast Conference Football Players of the Week have been recognized following their performances in Week 5 of the 2018 season. The selections are determined by a vote of a 15-member media panel. The following are this week’s honorees:

Willis threw for 332 yards on 17-of-27 passing with three touchdowns in Virginia Tech’s 31-14 win at No. 22 Duke • Making his first start since his freshman season at Kansas in 2016, Willis threw for the most passing yards since at least 1987 by a quarterback making his first start as a Hokie • Had a career-high three touchdown passes of 27, 67 and 10 yards • One-yard plunge on a quarterback sneak set up Virginia Tech’s final touchdown – a 10-yard strike from Willis to Phil Patterson • All six of Virginia Tech’s third-down conversions came via Willis pass completions.

Dortch tied his own school record with four touchdown catches in a 56-24 win over Rice • Had touchdown receptions of 54, 10, 38 and 4 yards • Finished with 11 receptions for 163 yards • The 54-yard catch marked a career long • Has now caught 14 touchdown passes in 13 career games • ACC weekly honor is his second of the season following his selection as Specialist of the Week on Sept. 10.

Hyatt graded out at 92 percent with two knockdown blocks in the Tigers’ 27-23 win over Syracuse • Helped power Clemson to 293 rushing yards • Hyatt, who earned his second ACC Offensive Lineman of the Week honor for the 2018 season, has now played the second-most career snaps from scrimmage in Clemson history.

Jackson led a dominant outing by the Hurricanes’ defense in Thursday night’s 47-10 win over North Carolina • Scored the second touchdown of his career with a 42-yard interception return for a touchdown • Forced two fumbles, added a quarterback sack and posted five total tackles.

In his third career start, Brooks led FSU’s linebacking corps with nine tackles, a sack, a quarterback hurry, one forced fumble and a pair of tackles for loss in Saturday’s 28-24 win at Louisville • First career sack came on Louisville’s opening drive, knocking the ball free from quarterback Jawon Pass and pushing the Cardinals out of field goal position on third down • Brooks’ nine tackles set a career high.

Quarterman had one of the best performances of his career versus North Carolina despite missing much of the second half with an injury • Registered a career-high three tackles for loss and finished with two sacks for the first time in his career • Forced a fumble on a quarterback sack that was returned for a touchdown • Broke up one pass and finished with five total tackles (three solo).

Floyd racked up eight tackles – including a career-high 2.5 tackles for loss – with one interception and a pass breakup in Virginia Tech’s 31-14 win at No. 22 Duke on Saturday • His 2.5 TFLs set a career high • First interception of the season and fourth of his career led to a Brian Johnson field goal that gave Tech a 3-0 lead • Solo tackle for loss and a pass breakup helped force a Duke three-and-out in the third quarter.

Szmyt matched his career high with three field goals for the third week in row, and was responsible for 11 Syracuse points in a 27-23 loss at No. 3 Clemson • Earned his second ACC Specialist of the Week honor as he connected from 35, 51 and 32 yards in the opening half to help Syracuse claim a 16-7 lead • His 51-yarder was a career long and the longest made field goal in the ACC this season • Fifth Syracuse kicker to make multiple 50-yard field goals in the same season • Average of 2.6 field goals per game leads the nation.

Hartman completed 15 of 17 passes for 241 yards and four touchdowns in Wake Forest’s 56-24 win over Rice • Following the first drive of the game, Hartman completed all 12 pass attempts for 218 yards and four touchdowns with no interceptions • His 284.96 quarterback efficiency rating was the highest ever by a Wake Forest quarterback with 12 or more pass completions • Twelve consecutive completions ties a school record shared by John Wolford and Riley Skinner • Hartman’s 284.96 efficiency rating is the third-best by an FBS quarterback this season.