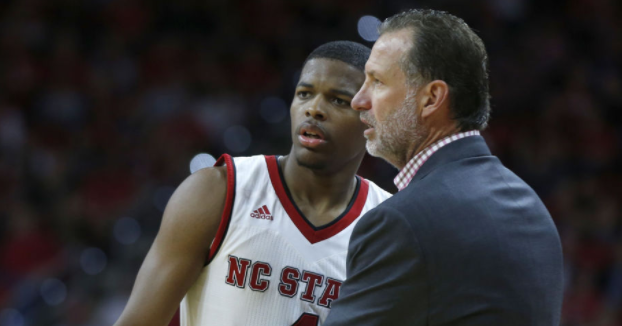 Dennis Smith Jr. is fifth in the ACC in scoring at 18.5 points per game. (AP Photo).

It feels like the the season just started, but every ACC team has played at least nine games. Conference play hasn’t started yet, but when it comes to prolific freshman basketball players, the ACC is as stacked as the pantry when you come home for a weekend in college.

It wasn’t easy to narrow this list to just five players, which is why the honorable mentions are included below, too. Let’s dive in.

The Wolfpack rookie point guard entered college as one of the most hyped freshmen in America. Smith ranks fifth in the ACC in scoring (18.5 points per game), fourth in assists (5.5) and fifth in steals (1.8).

After a chilly start from beyond the arc, Smith has heated up, going 8-of-18 (44.4 percent) the last four games. He’s now a respectable 34 percent on three-pointers.

According to Ken Pomeroy, the Fayetteville, N.C., product ranks No. 112 in the nation in assist rate (29.6 percent) — just behind North Carolina’s Joel Berry. Smith is also tied with Duke’s Grayson Allen for 17th in the ACC in player efficiency rating (PER) — 21.9.

There isn’t a freshman in the ACC who’s been asked to do more than Smith; so far, he’s delivered.

There may not be a more NBA-ready player in America than Tatum. After missing Duke’s first eight games with a foot injury, the freshman forward has impressed as a high-usage, high-efficiency player. Tatum has played in four games, made two starts and scored 10-plus points in every outing. He has played just 102 minutes on the season, but he currently leads the Blue Devils in usage rate (28.5 percent) and PER (28).

Tatum also ranks second on Duke’s roster in terms of rebouding rate (26.6 percent) and has pulled down an averaged of 7.5 boards per game. He has flashed some playmaking the last two games, too, handing out three assists each in wins over UNLV and Tennessee State.

Tatum could, however, rework his shot selection and look to shoot more from beyond the arc or at the rim. An improvement here would make him an even more efficient offensive asset.

40% of Jayson Tatum's shots are mid-range jumpers. He's making only 29% of them.

Duke, the third-most efficient scoring machine in Division I ball, gets scary good on offense when it downsizes and plays Tatum as its nominal power forward, with Amile Jefferson as the lone big man. Those two, plus some combination of Grayson Allen, Luke Kennard, Matt Jones and Frank Jackson, are as close to an NBA-style offense you will find on the collegiate level.

The No. 21 Florida State Seminoles currently have 12 players who have appeared in at least seven games and average greater than 10 minutes per game; it’s safe to say that they have received contributions from a plethora of players en route to their 12-1 start. You could easily make the case, though, that Isaac has been their best player.

According to Sports-Reference, Isaac produces better than 1.23 points per possession; he’s also averaging 15.3 rebounds per 100 possessions. The 6-10 forward, who floats between the 3 and 4, is producing .24 win shares per 40 minutes, which ranks 12th in the ACC.

Isaac has flashed a deft shooting stroke, too. He’s second on Florida State’s roster in three-point shooting percentage (38.2 percent), and he’s hit nearly 79 percent of his free throws. Isaac has demonstrated the ability to catch and shoot, but he can go get buckets off the ball in other ways, too, like cutting:

It’s no surpise that Isaac and Florida State are the ACC leaders in dunks, per Adrian Atkinson; the Seminoles have slammed home 71 dunks, which is 29 more than NC State — the No. 2 team in the conference.

It’s early, but Bradley has already shattered the lofty expectations that surrounded his arrival in Chapel Hill. This is not hyperbole; Tony Bradley is the best offensive rebounder in America. When he’s on the floor, Bradley grabs 22 percent of the available offensive rebounds — the best number in the NCAA, according to KenPom.

The Bartow, Fla., native plays just 17 minutes per game, but he has a monster impact as soon as he steps on the floor. The Floridian is snagging a ridiculous 19.5 rebounds per 100 possessions. He’s shooting 57.8 percent from the field, and he attempts 14.6 free throws per 100 possessions. Bradley has also been worth .29 win shares per 40 minutes, which would be a top-four number in the ACC if he had played enough minutes.

Defensively, Bradley is active, and uses his length to deter opponents at the rim (block rate of 3.5 percent). The Tar Heels were better defensively with Bradley on the floor at the 5 through their first 11 games than with Kennedy Meeks playing the pivot.

Bradley has yet to land on DraftExpress or NBADraft.net’s big boards, but according to Chad Ford, ESPN’s NBA Draft analyst, the freshman projects as a future first-round pick. If you watch him play, you know it’s only a matter of time.

The amount of weapons Duke has on offense is comical; this roster is just an embarrassment of riches. Jackson would star for countless Power 5 programs. At Duke, however, he is another piece of a really good team. Jackson is one of five Blue Devils scoring in double figures (12.7 points), and he’s found his stroke from all over the court. The Utah native is shooting 56 percent inside the arc and nearly 39 percent from the land of distance (on 44 attempts).

No team in the ACC spreads the floor better than Duke. Mike Krzyzewski’s team can dot the three-point line with shooters, which allows the ever-explosive Jackson, who is a fantastic leaper, to attack the paint devoid of too many defenders.

During Duke’s second-half outburst over Michigan State last month, Jackson flashed his abilities on back-to-back possessions. With the floor spread, Chase Jeter came up to set Jackson high ball screens toward the middle of the court; on both possessions, though, Jackson dribbled in the direction of Jeter’s screen — setting up his defender — only to cross back left and dart into the lane for points, including one finish that ensued after a gorgeous Eurostep.