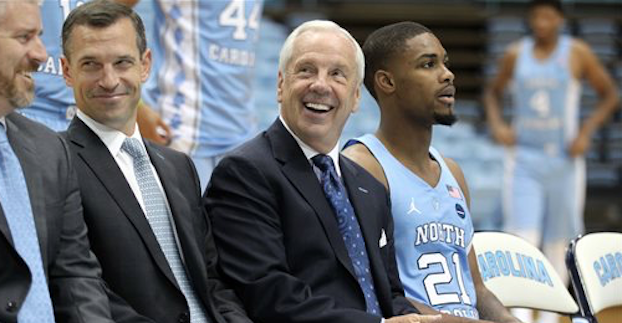 News broke on Wednesday night that the NBA and the National Basketball Players Association came to terms on a new seven-year collective bargaining agreement (CBA). One noteworthy development that affects the college game was the extension of the famed one-and-done rule.

The early-entry rule could change between now and 2024 — the end of the new CBA — as the Players Association and league will continue to discuss possible alternatives. The NBA is a proponent of a rule that would make American players spend two years in college (or abroad) before becoming eligible to enter the draft.

North Carolina and Kentucky are historically great programs that are both affected by this rule. The two play one another on Saturday.

No one has navigated the one-and-done stipulation better than John Calipari. Since the rule was implemented a decade ago, 21 of Cal’s players at Memphis and Kentucky have become first-round draft picks after only one season in college.

So how do Calipari and Roy Williams stack up with each other? The two coaches have squared off six times on the court over the last eight seasons, with Kentucky winning four of those contests, including the most recent meeting — back in 2014.

All 18 one-and-done players for Cal at Kentucky have gone in the first round of the draft. It looks like his current roster has another trio of likely one-year wonders: De’Aaron Fox, Malik Monk and Bam Adebayo.

Williams himself has acknowledged North Carolina’s recruiting struggles in recent years. However, if you look specifically at UNC’s starting five, they aren’t lacking star power. That doesn’t even include freshman Tony Bradley — another five-star phenom who comes off the bench. Since the origin of the rule, only one Tar Heel has gone the one-and-done route: Brandan Wright in 2007. Marvin Williams was drafted by Atlanta in the final NBA Draft (2005) before the rule was brought into existence.

If you are a fan of the Heels, though, the slightly disconcerting angle — if you’re into counting stars — may be which players return in 2017-18. Isaiah Hicks and Kennedy Meeks are seniors; juniors Joel Berry and Justin Jackson tested draft waters last spring; Bradley looks like a potential lottery pick. North Carolina’s roster could look a lot different next season.

Back to the present — take a look at the two projected starting lineups for when these teams meet Saturday in Las Vegas; recruiting rankings courtesy of 247Sports’ composite listings:

Kentucky obviously has an edge here, but North Carolina’s starting five is certainly not short on firepower.

Now, let’s take a look at the adjusted offensive efficiencies between North Carolina and Kentucky since Calipari arrived in Lexington.

North Carolina and Kentucky recruit and sign outstanding players, so it’s no surprise that these two programs put together great offenses that frequently land inside the top 20 of Ken Pomeroy’s adjusted offensive efficiency metric.

In four of Calipari’s seasons at Kentucky, the Wildcats have finished in the top 10; they are on pace to do that again in 2017. The 2012 offense was the highest-ranked unit Calipari has coached at Kentucky. That team, of course, had Anthony Davis and won a national championship. Last year’s squad, which scored better than 1.2 points per possession, was the high-water mark of Calipari’s run.

The Tar Heels’ points per possession numbers haven’t been quite as gaudy in recent years, which sounds ridiculous considering that UNC finished No. 1 in the nation in terms of offensive efficiency last season — the third time it has accomplished that since Williams got to Chapel Hill (2007-08, 2008-09). North Carolina has also finished second in the nation in this statistic under Williams: 2004-05 and 2006-07. UNC, like Kentucky, is currently a top-10 offense.

Williams and Calipari do things differently, but there’s no questioning their coaching abilities. They have both found success in the one-and-done era. Going back the last decade, only nine coaches have won NCAA championships; these are two of them. The results speak for themselves. If you don’t buy into the numbers on the page, take a glance up at the banners in the rafters.