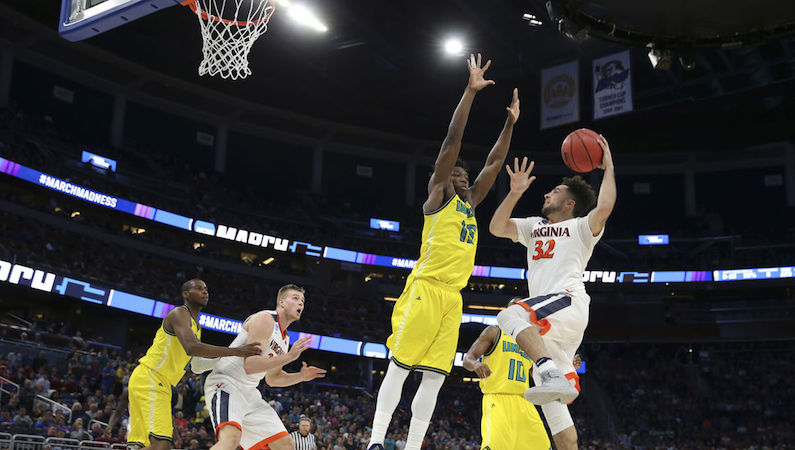 UNC Wilmington came out guns blazing in the first 13 minutes of the opening round NCAA Tournament matchup with Virginia. Following a Denzel Ingram three-pointer, the Seahawks grabbed a 26-11 lead at the 7:25 mark. It looked like another 5-12 upset was in the works. London Perrantes would not let that happen, though.

Virginia, predictably, settled in, roared back and won, 76-71. Wilmington kept the game close all throughout, but Kevin Keatts’ club had no answer defensively for a key lineup adjustment made by Tony Bennett. With forward Isaiah Wilkins rendered useless due to an unfortunate bout with strep throat, Bennett elected to downsize. UVA ran multiple lineups that include four — and sometimes five — perimeter players on the floor at the same time. It was the correct card to play.

The Cavaliers did not exactly have to go to work against the stingiest of defenses. Wilmington, according to KenPom, ranks No. 191 in the nation in defensive efficiency. This was still an impressive performance to watch, though.

Jack Salt, Virginia’s starting center, is known as a great screener. However, here is the thing, though: It does not always matter how big or well-positioned you are as a screener. If an opponent does not have to respect you as a scorer, then the threat you possess as a screener is limited. The defense simply has less to account for.

There is a reason why Stephen Curry is known as one of the best screeners in the NBA; opposing defenses have to switch seamlessly or he will burn them with a catch-and-shoot. North Carolina runs similar action with Justin Jackson.

Salt played just 15 minutes; Wilkins and Mamadi Diakite played 10 combined minutes of the bench. That is a total of only 25 minutes for Virginia’s bigs. This means the remaining 175 minutes of game time were played by guards and wings. Of note: This style of play was a little more doable, too, because Wilmington ranks No. 323 nationally in height, per KenPom. That made it a no-brainer to punt on size, and load up on guard talent.

Per Synergy Sports, Virginia ran 17 isolation plays against Wilmington — an unusually high number for this team. The Cavaliers used 19 possessions via ball handlers in pick-and-rolls, too. Virginia runs iso plays on just 8.6 percent of its possessions. In the five games leading up to the NCAA Tournament, UVA ran an average of 8.8 isolations per game, according to Synergy.

The floor was so well spaced and balanced. There were endless driving lanes to the basket for UVA, and London Perrantes and Marial Shayok were only too happy to constantly shred Wilmington. The two upperclassmen combined for 47 points on 28 field goal attempts, which is wildly efficient. They get into the lane at will, frequently off the bounce.

According to Sports-Reference, Perrantes posted a usage rate of 29.4 percent; Shayok recored a usage rate of 31.5 percent. This means that when they were on the floor, each player shot the ball, turned it over or got fouled on roughly 30 percent of Virginia’s possessions.

This type of rotation may not be so palatable in the round of 32 matchup with Florida on Saturday, however, but for the time being, it bought UVA another game. At this time of the year, that is all that matters.