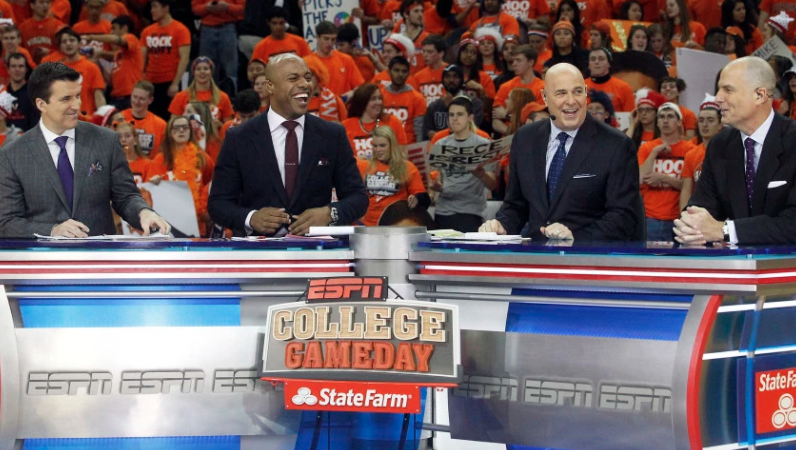 These four guys should be a welcomed sight for any team hosting ESPN's College GameDay. (AP Photo).

Get victory formation ready for when GameDay is town

ESPN’s popular College GameDay program will be back in Durham this Saturday for when Duke hosts Miami. This will be the 14th time Duke has participated in a GameDay broadcast — the second most of any school. They have played North Carolina in eight of those games. Overall, Duke has a record of 7-6 in GameDay performances; against UNC, they are 5-3.

GameDay has been around the college basketball landscape since the 2004-05 season. Not factoring in for appearances at conferences tournaments, or when the show has attended women’s games, home teams have fared quite well. Without adjusting for margin of victory, home teams have won 61 of a possible 95 games — a win percentage of 64.2 percent. This will be the first College GameDay of the 2016-17 basketball season.

Also, this shouldn’t come as too much of a surprise, though. While home court winning percentage in conference play is on the decline in college basketball (57.1 percent in 2016-17, compared to 64.3 percent back in 1996-97), it still matters a great deal — more so than any other major North American sport over the last decade.

Courtesy of Sports Illustrated and STATS:

(Note: Some coaches, like Rick Pitino, have cited officiating as the cause for this shift; however, teams are also shooting more three-pointers than ever before, which increases the variance, which in turn makes upsets more likely.)

Transfers: More than meets the eye

Wake Forest added two transfers to the rotation this year — Austin Arians and Keyshawn Woods. Both players have helped boost the best shooting teams in Winston-Salem since Danny Manning arrived on campus.

John Collins’ post-ups are the backbone of Wake’s offense, but Arians and Woods have provided the shooting necessary to balance the floor around that interior action. According to Synergy Sports, Arians scores better than 1.12 points per possession on spot-ups, and on juicy catch-and-shoot opportunities, the former University of Wisconsin-Milwaukee Panther has connected on 43.1 percent of his attempts. This ranks seventh in the ACC amongst players with at least 50 catch-and-shoot possessions.

According to KenPom, Arians currently ranks 13th in the nation in offensive rating — thanks to his potent three-point shooting (43.2 percent) and low turnover rate (10.3 percent).

Woods has returned to Earth after a blistering start: the Charlotte transfer shot 64 percent from beyond the arc in his first seven games as a Demon Deacon. Woods, however, connected on three of four three-point launches in the win over Miami, and is back up to 44.4 percent from deep this season.

Woods has made 44.7 percent of his 47 catch-and-shoots (21) this season, per Synergy. He’s excelled in transition, especially filling on the wing. The redshirt sophomore is shooting 70 percent this season (14-of-20) from the wing in transition.

King for a day — and perhaps more

With lead guard Quentin Snider out two-three weeks because of a hip injury, Louisville has to fill up the guard minutes in a more piecemeal style. The Cardinals blew the doors off Clemson in the first game sans Snider, 92-60. V.J. King, the 6-6 freshman, grabbed his third career start, and played well in 22 minutes of action.

King, a former five-star recruit, turned the ball over just once, and scored 14 points on only eight field goal attempts, including two three-pointers. The freshman produced 1.62 points per possession while on the floor, which was second on the team to only Jaylen Johnson, who went for his third double-double of the season in victory.

The 14 points were three shy of tying a career high, and the performance against Clemson was the best he’s had in league play. Rick Pitino will need more of this as the Cardinals try to navigate murky ACC waters without Snider, the starting point guard. It’s a quick turnaround for Louisville, too: the Cards are at Florida State on Saturday.