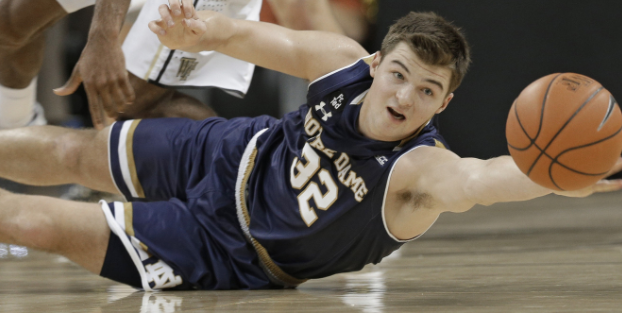 Steve Vasturia leads one of the nation's most efficient offenses in scoring. (AP Photo.)

While the #WakeyLeaks scandal drew all the headlines, a mostly inactive ACC basketball week passed without much noise. However, the return of the weekend brings the return of ACC hoops. Here are a few things to keep an eye.

Notre Dame’s roster is loaded with terrific offensive players, but Steve Vasturia has emerged as the team’s leading scorer — a career high 16.6 points per game. Vasturia is currently shooting 51 percent from the field — 55.2 percent on twos, 44.4 percent (20-of-45) on 3-pointers. He’s also connected on 97 percent of his free throws. He’s currently in the vaunted 50/40/90 territory — a place where Stephen Curry and Kevin Durant occasionally rent property in the NBA.

The senior forward is launching more threes than ever before: better than 40 percent of his field goal attempts have come from beyond the arc. Vasturia has gotten to the line at an improved rate, too. He’s made all but one of his 33 free throw attempts this season; Vasturia ranks fourth in the nation in free throw percentage. All of this compiles into a true shooting rate of 65 percent — a top 100 number, according to Ken Pomeroy.

Notre Dame has a matchup with No. 15 Purdue on Saturday, which will feature two of the top 15 offenses in the nation.

Ben Lammers and the art of rejection

The nation’s leading shot blocker was a relative unknown prior to this season, but under first year coach Josh Pastner, center Ben Lammers has transformed into a menace protecting the rim.

Lammers rejects 4.6 shots per game, which is the best number in the NCAA. He’s one of only two players, along with Baylor’s Jo Acuil (4.3), to average better than four blocks per game. His block rate of 12.7 percent is tops in the ACC and also ranks 13th in the nation. Lammers has rejected four or more blocks in all but one game this season.

According to KenPom, the Yellow Jackets yield 98.1 points per 100 possessions, which ranks 70th in the nation. Lammers is the backing of that defense, and he’s also become a quality two-way post player as a junior; he leads Georgia Tech in scoring — 15.8 points per game (59 percent shooting).

Hey, how good has Seth Allen been? The answer is very good!

Allen is averaging 10.7 points per game — four fewer than a season ago. However, he’s getting his points in a much more efficient manner. After shooting 157 3-pointers a season ago, and only making 28 percent of them, Allen has refined his touch. He’s taking 2.7 threes per game, which is the smallest figure of his career; but the 45.8 percent clip he’s hitting at from beyond the arc is a career best.

His accuracy rises inside the arc, which is great for a team that ranks No. 55 in two point field goal percentage (54.5 percent). The senior southpaw is shooting 58.2 percent from the field (65.1 percent on 2-pointers) — a near 20 percent increase over his redshirt junior season in Blacksburg.

The turnovers have come too frequently this season (23.8 turnover percent), but Allen has also evolved as a shot-creator. When he’s been on the court, Allen has assisted on better than 24 percent of Virginia Tech’s made field goals — another career high.

Thursday night in Raleigh marked the arrival of NC State’s star freshman Omer Yurtseven — or Yurtmas, as the kids were calling it. Let’s chill on the Marc Gasol comparisons for the moment, but Yurtseven had a solid debut: 12 points (4-of-6 from the field) and four rebounds. He also made the first and only 3-pointer of his college career, right from the top of the key. Prior to the season starting, Mark Gottfried said he thought the freshman from Turkey would be able to stretch the floor. This would be a serious boon for the Wolfpack’s offense, which ranks 34th in the nation in adjusted points per possession.

Appalachian State isn’t the stiffest of competition; however, it was a nice performance from Yurtseven, who played 24 minutes off the bench. NC State, finally now at full strength, has three more games before conference play fires up, which gives the roster some valuable time to build chemistry. The Wolfpack still really need to improve on the defensive end; they rank No. 107 in the nation in defensive efficiency.

Due to the COVID-19 pandemic, Pittsburgh's star All-ACC defensive lineman Jaylen Twyman has decided to…

Starting with Virginia Tech's Caleb Farley, here's a complete list of ACC players that will…