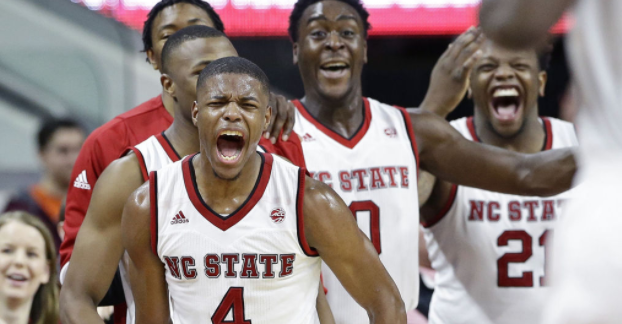 As winter weather swings across parts of the ACC footprint, the second weekend of conference play is upon us. Assuming the weather holds up, we should have some excellent ball to watch while staying inside this weekend. Here is what’s on tap in the weekly stats rundown.

Dennis Smith Jr. has done it all for NC State this season. The star freshman is shooting a healthy clip from just about every range and distance. He assists on better than 35 percent of NC State’s made field goals while on the floor, too.

Smith gets to the line at will, which was on full display Wednesday night in the win over No. 21 Virginia Tech. Against the Hokies, the rookie point guard attempted 15 or more free throws for the third time this season, while recording the second triple-double in program history.

However, an underrated part of Smith’s game is his ability to knock down catch-and-shoot jumpers. Smith ranks second in the ACC in points per possession on catch-and-shoots — 1.56 (behind only Seth Allen of Virginia Tech). According to Synergy Sports, Smith connects on catch-and-shoots 52 percent of the time. Not surprisingly, though, that number rises when he’s left unattended: 77.8 percent (7-of-9).

The Wolfpack played its best game of the season against the Hokies this week. Mark Gottfried will once again need Smith to lead the charge as NC State, weather permitting, travels to Chapel Hill Saturday night.

Who says you need a back-to-the-basket big man to establish a post-up? Duke’s offense already has so many weapons and variations it can break into, but one thing the Devils have worked into the mix is an occasional post-up for Jayson Tatum.

He isn’t exactly Shaq, but in his seven career games, Tatum has recorded 12 post-ups, according to Synergy Sports. Tatum has shot the ball eight times on those possessions, making five baskets. He is shooting 62.5 percent out of the post and scores at a rate of one point per possession, which is tied for the fourth-best mark in the league.

Tatum is shooting just 48.5 percent on two-point field goals this season; he should try to cut out some of his mid-range attempts, where he is shooting 25 percent from, per Synergy.

Miami is actually off this weekend; it won’t play again until next Thursday — when it hosts Notre Dame. The Hurricanes are 11-3 (1-1 ACC) on the season, and a key for the midseason success has been a sturdy offensive rebounding game. Enter: Kamari Murphy.

Murphy, the Oklahoma State transfer, ranks 119th in the nation in offensive rebound rate — gobbling up 12.1 percent of available rebounds on that side of the floor — almost double from what he posted in 2015-16. The fifth-year senior already has 40 offensive rebounds on the season, which is only seven fewer than he had all of last season.

While he isn’t a prolific scoring threat (7.2 points), Murphy does, however, know what to do with the ball when he snags an offensive board. According to Synergy Sports, he is shooting 76.2 percent (16-of-21) on putbacks this season. Murphy scores 1.42 points per possession on putbacks — eighth-best in the ACC.

If Miami is going to stay afloat on offense, then the Hurricanes will need to find ways to score on the margins, which is exactly what Murphy is providing.

Despite the 0-2 start in ACC play, the sky isn’t falling just yet in Louisville. The offense, which ranks 44th in the nation in efficiency, doesn’t have quite enough outside shooting to scare opponents, which means the Cardinals will frequently have to rely on defense to win games.

That is not necessarily a bad thing for this group; Louisville ranks No. 1 nationally in adjusted defensive efficiency — a stingy 86.8 points per 100 possessions.

One of Louisville’s calling cards (pun) is the team’s ability to defend in transition. Rick Pitino’s club allows just 0.88 points per possession in transition, which is good for 35th nationally and ranks fifth in the ACC. Louisville’s defense forces a turnover 18 percent of the time on transition possessions, too. This has been achieved, by the way, against the ninth-most challenging schedule in America, according to KenPom.com.

The Pitt Panthers, for the record, rank last in the ACC in transition defense — they allow 1.2 points per possession.