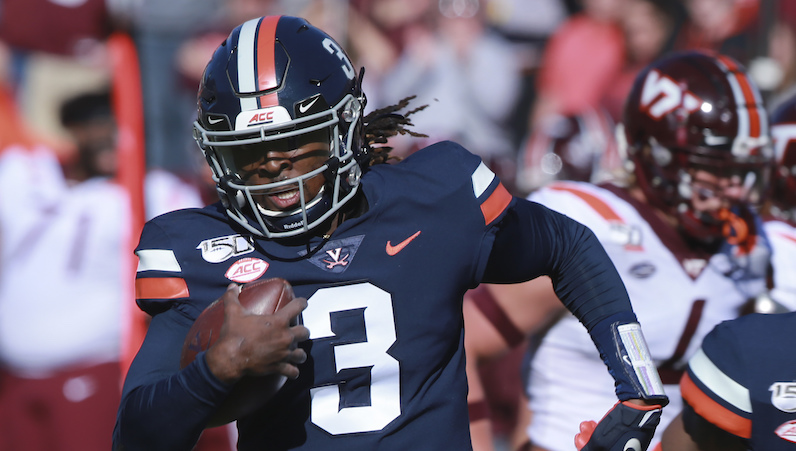 Virginia quarterback Bryce Perkins (3) heads to the end zone for a touchdown during the first half of an NCAA college football game against Virginia Tech in Charlottesville, Va., Friday, Nov. 29, 2019. (AP Photo/Steve Helber)

After three months of action, the ACC has its two best teams — Clemson and Virginia — headed to Charlotte for a title bout. That’s great. With that in mind, here are the final ACC Football Power Rankings of the 2019 season. Folks, we’ve done it. And it’s beautiful.

The Coastal Chaos is complete.

Seven years, all seven teams have won the division.

In one of the biggest games of his career, Bryce Perkins put together a masterpiece — helping smash Virginia’s 15-year drought against Virginia Tech. Perkins completed 61 percent of his passes for 311 yards and a touchdown; he also carried the ball 19 times for 164 yards and two rushing scores, too.

Perkins joins Oklahoma’s Jalen Hurts as the only two FBS players this season to throw for 300+ yards, run for 150+ yards, and record at least one passing touchdown and one rushing touchdown in a single game. Now he must get ready to face the No. 1 defense in the country.

Virginia's 15-game losing streak vs Virginia Tech is over! Bryce Perkins accounted for 475 of UVA's 492 yards on the day.

The Cavaliers will face Clemson in the ACC Championship game, making Virginia the 7th different Coastal division representative in as many seasons. pic.twitter.com/UJyqSoURZV

Virginia Tech fought hard in defeat against Virginia; however, four turnovers and 141 penalty yards proved costly for the Hokies. Even after a rivalry loss, though, there’s plenty to celebrate with this team going forward. After a strong second half to the season, Virginia Tech has positioned itself for a quality bowl opportunity.

Louisville knew what was coming, but the Cardinals couldn’t stop it. The team’s blowout loss to Kentucky doubled as the Lynn Bowden Show. Kentucky attempted only two passes in this game, and ran the ball right at Louisville.

Kentucky posted 521 yards of total offense on Saturday, including 517 rushing yards — with Bowden accounting for over half of that total.

.@LynnBowden_1 put on an absolute clinic against Louisville:

The most rushing yards by a QB in a game in SEC history 🔥 pic.twitter.com/wvR645bCsg

Wake Forest hasn’t been itself down the stretch this season — losing three of the last four games. That stretch was punctuated with a disappointing road loss at Syracuse. Sam Hartman played well in relief of Jamie Newman (knee); however, the Demon Deacons fell short in overtime, which drops them to 8-4 on the season.

Wake Forest coach Dave Clawson: "I feel terrible for Kendall (Hinton). He’s made so many plays for us this year. He feels terrible, but without Kendall we’re not in this position for our season and not in that position in the game."

In the regular season finale, Pitt simply had no answer for AJ Dillon, who ran all over the Panthers: 32 carries for 178 yards and a touchdown. With a bowl game on the horizon, Pitt still has a chance to finish with eight wins for the third time under Pat Narduzzi.

AJ Dillon is on a mission right now. That's his sixth consecutive carry.

First, he uses a stiff arm to create separation, then he carries Pitt DB Jazzee Stocker past the first-down marker.

If you’re dancing after a rivalry game, that’s usually a good thing, right? Just ask Mack Brown. That Sam Howell guy is pretty good, too: 401 passing yards (a career high) and three touchdowns through the air.

Mack Brown is a mood 😂 @TarHeelFootball became bowl-eligible for the first time since 2016.

This is possibly the most vexing team in all of college football. After three straight wins, Miami inexplicably lost to FIU, and then followed that up with another embarrassing performance at Duke. The Blue Devils sacked the Hurricanes nine times in Durham. This was just the third time this season that an ACC team has given up nine or more sacks in a game.

Going up against Florida’s top 10 defense proved to be a brutal challenge for Florida State: 250 yards of total offense — the second lowest total of the season. At 6-6, Florida State is headed back to a bowl game — with big decisions to be made on the horizon.

Multiple sources saying the Champions Club at Doak Campbell Stadium is set up right now for a “major announcement.” Have been told (obviously unconfirmed) that it’s the new #FSU Head Football coach.

Announcement could come “as soon as today, possibly Tuesday or Wednesday.”

One day after Boston College’s road win over Pittsburgh, the program decided to part ways with Steve Addazio — King of The Dudes — after seven seasons. Former BC wide receiver Rich Gunnell will serve as the team’s interim coach.

Steve Addazio finishes his tenure at Boston College with a career record of 44-44.

If that’s not the most fitting number to sum up the Addazio era, I don’t know what is.

Back on Oct. 10, NC State defeated Syracuse on a Thursday night game; the win moved the Wolfpack to 4-2 overall (1-1 ACC). After that, though, wow, did things turn ugly. NC State lost six straight games — five coming by double-digit margins. Over that stretch of six games, the Pack posted a point differential of -147. This was, of course, punctuated by a 31-point clunker against UNC — a fitting coda for NC State’s 2019 season.

I expect there will be a new OC/playcaller, too.

Do you think I asked a specific question on Saturday after the game by accident?

Save the best for last: after sleepwalking through most of the 2019 season, Syracuse woke up in November, and scored notable wins over Duke and Wake Forest.

Dino Babers was emotional after the game, when asked about the disappointing season—but also how it ended in such exciting fashion.

Georgia Tech lost to Georgia by 45 points on Saturday.