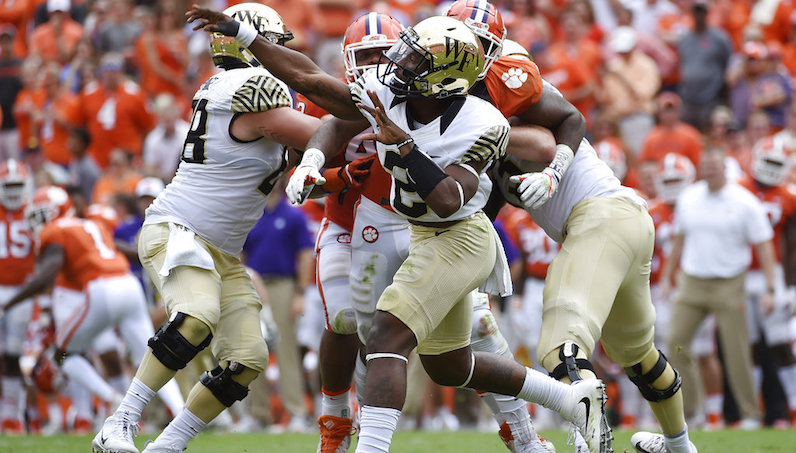 All the elements of Dave Clawson’s quarterback conundrum were back on display Saturday when Kendall Hinton got the surprise start at Clemson because of John Wolford’s shoulder trouble. While Hinton didn’t win the game, he reminded everyone of what makes him a tantalizing option and also what’s kept him on the bench.

Clawson has had Hinton and Wolford locked in a battle for three years. Hinton had jumped ahead of Wolford last season, when Clawson named him the starter for week three after rotating the two through the first two games.

But when a knee injury felled Hinton, Wolford took over. Although Wolford’s performance wasn’t overwhelming, the Deacons qualified for a bowl game, where they beat Temple. Still, though Hinton was rusty in the spring, Clawson said that Hinton remained the starter.

But it was Wolford who opened the season, without a rotation. The results were strong: The Deacons started 4-1, and Wolford leads the team in passing and rushing. He’s completed 63 percent of his throws with eight touchdowns against one interception. Freshman receiver Greg Dortch emerged as a star, too.

So if Hinton lost his start at Clemson and completed only 14 of 30 throws, then why is this a discussion at all?

Because in his starts, Wolford continues to remind us of his limitations, and Hinton reminds us of his potential.

Wolford’s arm strength always has been an issue, and it keeps the Wake Forest attack from stretching the field. Hinton threw the ball all over the field, challenging the Tigers’ defense.

Also, while Wolford has been a strong runner his entire career, he doesn’t have the speed or elusiveness of Hinton. Against Clemson, Hinton broke off a 37-yard run, and overall ran 21 times for 99 yards, after subtracting the three times he was sacked.

Where Wolford has excelled, though, is his decision-making and game management. And that’s where Hinton struggled against Clemson.

Hinton admitted in his postgame comments that he had to adjust to the pace of the game. He also clearly made some wrong reads in the passing game, forcing the ball long too often. He was only 8-of-21 passing (although his teammates committed several drops) before Clemson put in some reserves, allowing Hinton to finish 6-of-9 with touchdown throws on the final two drives.

“He missed some throws, and at times, his eyes weren’t in the right place and the ball didn’t go where it should go,” Clawson said after the game.

In addition, Hinton botched an audible on fourth-and-three at the Clemson 17 late in the third quarter. The Deacons appeared confused and didn’t convert.

All of that makes a coaching staff long for the quarterback who is more like the coach on the field, although Kendall Hinton certainly gets some credit for having his first start come against one of the country’s top defenses.

Clawson will have an off week to figure out what he wants to do before the Deacons face another excellent defense at Georgia Tech. By all accounts, Wolford should be recovered by then.

While Wolford, who has 38 starts under his belt, seems like the obvious choice, Clawson has a couple of other things to consider. First, the Deacons will be longshots to win their next three games: at Georgia Tech, at home against Louisville and at Notre Dame. Is the best route to an upset to cut down on mistakes or to play the quarterback who could make the biggest plays?

Second, at some point, Clawson also has to think about next season. Wolford will be gone, and Hinton will be in a battle with Jamie Newman for the starting job. How important is it to Clawson — with the Deacons still needing two wins to be bowl eligible — to get Hinton meaningful reps this season to prepare for the next one?

While we don’t know which direction Clawson will go, we do know that this discussion will continue for the rest of the season.