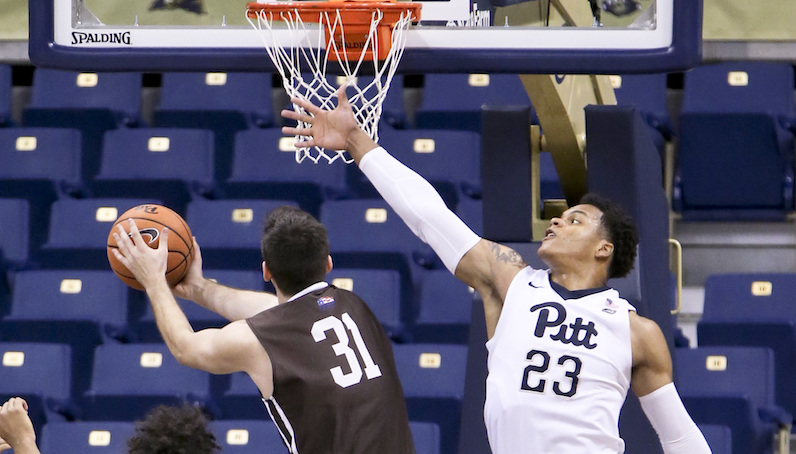 After a recent official visit to NC State, the Wolfpack received a commitment on Thursday from Lehigh graduate transfer Pat Andree. The 6-foot-8 Andree averaged 12.9 points (57.6 eFG%) and 6.2 rebounds (8.6 per 40 minutes) as a junior this season.

Andree had visits to Kansas State and TCU on the horizon; however, the New Jersey product is will head to Raleigh, instead.

Excited to announce that I will be graduating from Lehigh University in May and will be using my 4th year of eligibility to play as a graduate transfer for Coach Kevin Keatts and his staff at North Carolina State University. GO PACK!!! #WPN pic.twitter.com/BHFDrBmluL

During his time at Lehigh (86 games, over 2,220 minutes of action), Andree attempted 441 3-pointers — making 184 (41.7 3P%). In each of the last two seasons — with Andree as a starter — he posted usage rates of at least 18 percent (still relatively low) and shot above 42 percent from deep. Nearly 64 percent of his career field goal attempts are of the 3-point variety.

Andree is catch-and-shoot player, which is something NC State (35.2 3P%) could use in its rotation. Remember: NC State ranked 316th nationally this season in spot-up efficiency — 0.84 points per possession (44.3 eFG%), per Synergy Sports. The was a big drop-off from the first season under Kevin Keatts: 1.02 points per possession (54 eFG%), No. 58 in the nation. NC State missed Sam Hunt, Al Freeman and Omer Yurtseven.

During the 2018-19 season, nearly 96 percent of Andree 3-pointers (67) were assisted; in the two previous seasons, that assist rate hovered closer to 98 percent. According to Synergy, Andree scored 1.22 points per possession (60.6 eFG%) on half-court catch-and-shoot possessions, which is a monster number.

He also posted a turnover rate of just nine percent as a junior, too. The equation is simple: catch and shoot, or keep the ball moving.

If Markell Johnson returns to NC State, it’s not hard to envision the Pack running high double drag screens with DJ Funderburk and Andree — with Funderburk rolling and Andree (60 eFG% on pick-and-pops) popping out beyond the arc.

With the commitment of Andree, NC State’s roster is full; however, the Pack is looking at several other transfer players, including Christian Keeling of Charleston Southern. The decisions of Johnson and Lecque will ultimately factor into the roster calculus — as will the possibility of someone transferring out of the program.