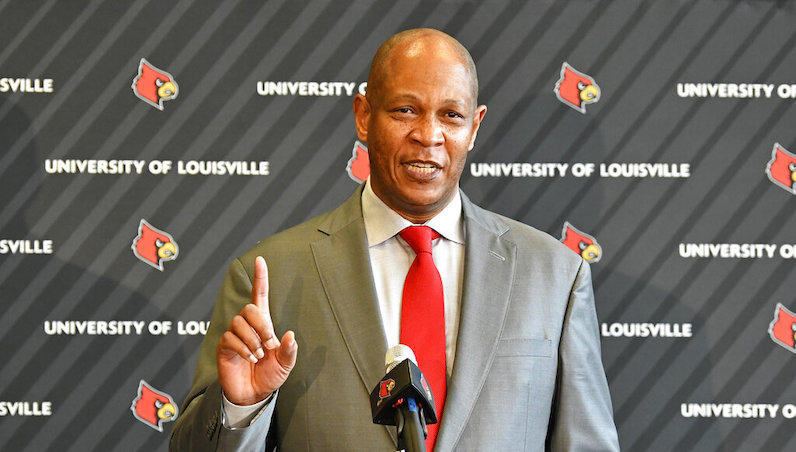 Kenny Payne speaks to the crowd following his introduction as the new head coach of the University of Louisville men’s basketball program at the KFC Yum! Center in Louisville, Ky., Friday, March 18, 2022. (AP Photo/Timothy D. Easley)

Karter Knox, after waiting in the shadows of his big brothers, is on the scene now, alone, as one of the top prospects in the 2024 recruiting class. Knox, a 6-foot-5 wing from Tampa (Fla.) Catholic, ranks as the No. 14 overall prospect in the 2024 class, per 247 Sports.

Back in the 2017 recruiting cycle, Kevin Knox Jr., the older brother of Karter, was a 5-star forward and one of the top prospects in the class. He was recruited heavily by both Duke and North Carolina. Ultimately, Knox picked Kentucky.

While college teams recruited Knox in 2017, his father, Kevin Knox Sr., would request that each program allow him access to their gym — for an hour — so he could go through drills with his sons. (Kobe Knox, the middle son, plays for Grand Canyon University). When these workouts took place, Karter Knox would run around and spend time with various assistant coaches: Hubert Davis, Kenny Payne, Jeff Capel and Nate James.

Well, three of those men — Davis, Payne and Capel — are now head coaches in the ACC. Last week, Payne and Louisville offered a scholarship to Knox. Illinois, Arizona State and Boise State have also offered Knox.

We spoke with ‘24 Karter Knox (@tampacathhoops/@fl_Rebels) today at #PangosAACamp and talked about growing up with Kevin Knox and what he’s learned from him, what he’s looking to work on moving forward, and more. Illinois, Arizona State & Louisville on him hardest. Q&A coming 🔜 pic.twitter.com/DgOCSoyLsx

Kentucky’s John Calipari, who coached Kevin Knox for one season in Lexington (2017-18), has watched Knox play in the prep/offseason circuit. Payne, of course, was an assistant coach for the Wildcats that season, too.

By this time next week, college coaches will be able to communicate directly with prospects in the 2024 recruiting class, like Knox. It’s safe to say: his recruitment will continue to gather steam.