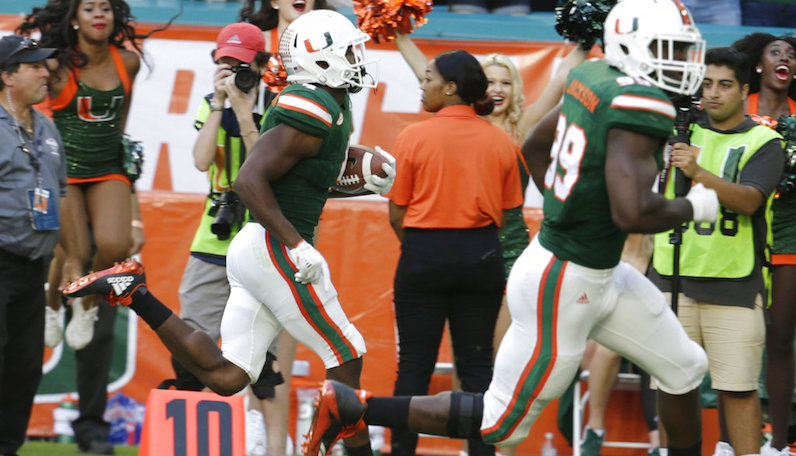 Miami defensive back Jaquan Johnson, left, runs back an interception for a touchdown during the second half of an NCAA college football game against Virginia, Saturday, Nov. 18, 2017, in Miami Gardens, Fla. Miami won 44-28. (AP Photo/Lynne Sladky)

The Atlantic Coast Conference Football Players of the Week have been recognized following their performances in week 12 of the 2017 season.

Jackson finished Saturday’s 56-10 win over Syracuse with 381 yards of total offense. He had 270 yards passing with two touchdowns and added 111 yards rushing with two more scores. Jackson now owns the school record for career total offense with 12,474 yards and ranks third all-time in the ACC. The reigning Heisman Trophy winner is only the second player in ACC history to string together five-straight 100-yard rushing games twice in his career, joining former Boston College standout Montel Harris. Jackson was named the ACC Offensive Back of the Week for the second time this season after first being selected on Sept. 11.

Anderson helped Wake Forest keep a clean pocket and prevent quarterback John Wolford from being sacked during the Demon Deacons’ 30-24 win over NC State. This year’s Deacon squad became the first team in school history to accumulate 2,000 yards rushing and 3,000 yards passing in the same season. With 388 total points, this year’s Wake Forest team is also the highest scoring in school history. Anderson graded out at 90 percent and had one knockdown block. A versatile lineman, Anderson spent several series playing tackle when Jake Benzinger was temporarily knocked out of the game.

Hines caught eight passes for a game-high 139 yards and a career-high three touchdowns in Wake Forest’s 30-24 win over NC State. Hines had touchdown catches of 21, seven, and 18 yards from John Wolford. The third touchdown, on an 18-yard fade route with 8:03 to play in the game, proved to be the game-winning score. It was Hines’ third 100-yard receiving game of the season.

Playing in his final home game as a Hurricane, Harris delivered a performance to remember in Miami’s 44-28 win over Virginia at Hard Rock Stadium. Harris had two sacks, his third multi-sack performance of the year. Harris, who entered the season with 6.5 career sacks, now has a team-best eight sacks in 2017. He finished with 2.5 tackles for loss and three total tackles in the win over the Cavaliers.

Kaindoh tallied six tackles, including four sacks, in Saturday’s win over Delaware State. Kaindoh’s four sacks are tied for the most of any player in the country this season. Kaindoh entered the game with just nine tackles and zero sacks through FSU’s first nine games. As a team, FSU held Delaware State to just 15 rushing yards, the fewest allowed in 105 games under head coach Jimbo Fisher.

Kemp had two critical plays for the Deacon defense in the 30-24 win over NC State. Kemp forced a fumble from Jaylen Samuels late in the third quarter to stall a Wolfpack drive. And in the closing minutes with Wake Forest leading by six, Kemp forced a fumble from Emeka Emezie and then recovered the ball in the end zone for a touchback. Kemp had eight tackles including seven solos, two forced fumbles and the crucial recovery, plus a quarterback hurry.

Johnson earned his third consecutive ACC Defensive Back of the Week as he once again led the charge for the Hurricanes in the 44-28 win over Virginia. Johnson led Miami and tied for the game high with nine total tackles (four solo) and added his first career touchdown on an interception that he returned 30 yards to tie the game at 28 in the third quarter. Johnson, who added a solo sack in the victory, was one of just four defensive players named a Walter Camp Player of the Year Award semifinalist last week.

Winslow had an outstanding game in Saturday’s 20-14 loss at Virginia Tech, both punting the ball and throwing it. The senior averaged 49.8 yards on four punts with a long of 53. He stepped outside of his conventional duties in the fourth quarter when he helped execute a gadget-play fake field goal by passing for a 15-yard touchdown to Nathan Bossory. The touchdown strike gave Pitt a 14-10 lead. Winslow is averaging a career-best 44.6 yards on 51 punts this season, an average that ranks 14th nationally and second in the ACC.

Dillon finished with his second career 200-yard game in Saturday night’s win over UConn at Fenway Park. The Connecticut native rushed for an even 200 yards on 34 carries and two touchdowns to lead the Eagles past the Huskies. Dillon had two 50-plus yard runs in the first half and totaled 140 yards and a touchdown at halftime. Dillon now ranks 10th in Boston College single-season history with 1,239 rushing yards. Dillon is fourth among ACC freshmen all-time in single-season rushing as well and joins Amos Lawrence of North Carolina (1977) as only the second ACC freshman to post two 200-yard rushing games in a season.

What’s on the line for the ACC with Clemson vs. Miami?