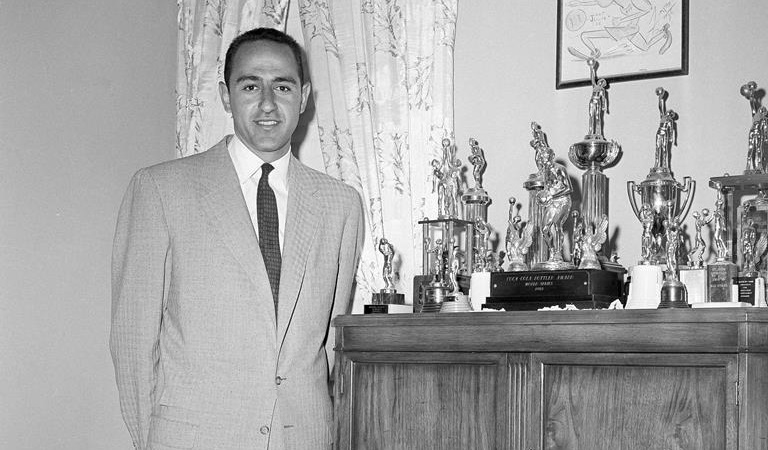 Jack Molinas, already a known gambling associate from the CCNY point shaving scandal in 1951, was implicated in another gambling scandal as well 10 years later.

In 1961 breaking sports news came out in more of a trickle than a flood, unaided by social media or even sports broadcast reports. But even with only one news source a day – usually the robust local sports page – that spring was one of heightened drama in the college basketball world.

In mid-March came the revelation that two men had been arrested in New York, charged with conspiring to fix the results of college games by bribing players. Less than a week later, Sports Illustrated shed new light on the scandal with an article called “The Facts About the Fixes.” The initial indictments had mentioned Seton Hall, Dayton, Connecticut and Colgate, but the SI story included the tantalizing statement that more players would soon be implicated from “a number of Southern State universities.”

Every few days from March through May, players from a new university were uncovered as part of the vast point-shaving network, which was directed by former Columbia University and NBA player Jack Molinas, managed by his gambling associates and backed by mafia money. In late April, when UNC players Lou Brown and Doug Moe were implicated in grand jury testimony in New York, the scandal came home to roost in the Triangle. The two were later cleared of fixing any games, but more fallout was still to come in ACC country.

On May 13, 1961, in the size and font of headline type normally reserved for a cataclysmic world news event, the News and Observer announced, “Three N.C. State Players Charged with Cage Fixing.” The testimony in New York and a resulting investigation by the State Bureau of Investigation had resulted in arrest warrants for three Wolfpack players: Anton Muehlbauer, Stan Niewierowski and Terry Litchfield.

The players would soon have to answer for themselves in the legal system, but every fan of a Big Four team also felt the repercussions of their actions. Before the month was over, the UNC Board of Trustees had met and agreed on a series of measures designed to stem what system president Bill Friday viewed as the growing excesses of college athletics.  The new restrictions involved a limit on out-of-state recruiting, a ban on organized basketball during the summer and a reduction of the schedule that led directly to the cancellation of the popular Dixie Classic holiday tournament.

In 2011, as I was researching a book about the Dixie Classic and the scandal that brought it down, I had the opportunity to interview Friday in his Chapel Hill office, just before his ninetieth birthday. The following fall Friday died, leaving behind a six-decade legacy of working to keep college athletics from overtaking the educational mission of the universities under his purview.

“We’ve turned the universities into entertainment centers,” Friday said that day in 2011, as new revelations about an academic cheating scandal in the UNC football program rocked the campus where he sat. “I’m not hollering, ‘I told you so.’ My answer to it all is, ‘I’m very sad.’ Because it’s creating an aura around an institution that is deeply revered that ought never have happened. And the strong voices have got to rise up and say, ‘No more of this. No. More. Of. This.’ And maybe it will start to right itself.”

As the intensity and range of college basketball’s latest scandal spilled out in a social media-aided torrent on Tuesday, I thought of Friday and his life’s work. Once again, as in 1961, individuals driven by dollar signs have ensnared college basketball players with the promise of wealth, doing further damage to the game that helped put the Dixie Classic and the ACC on the national sports map. Like those escalating newspaper headlines of 56 years ago, the day kept bringing more revelations and confirmations. Oklahoma State. Auburn. Louisville. Adidas. And still, the dread of more bombshells to come.

Fans of North Carolina college teams felt a measure of relief that the initial FBI report included no mention of their schools’ involvement in the web of payoffs. But like the initial point-shaving disclosures during that long-ago March, the day’s events left everyone who cares about college basketball more than a little bit uneasy.

Additional coaches and players from other schools will almost certainly be revealed in the coming days and weeks, possibly closer to home for ACC fans. But even if local programs remain untainted, the reminders of 1961 – and its lasting effects – seem particularly vivid in the light of this week’s events, which had me searching for 2017’s answer to the steady presence of Bill Friday.