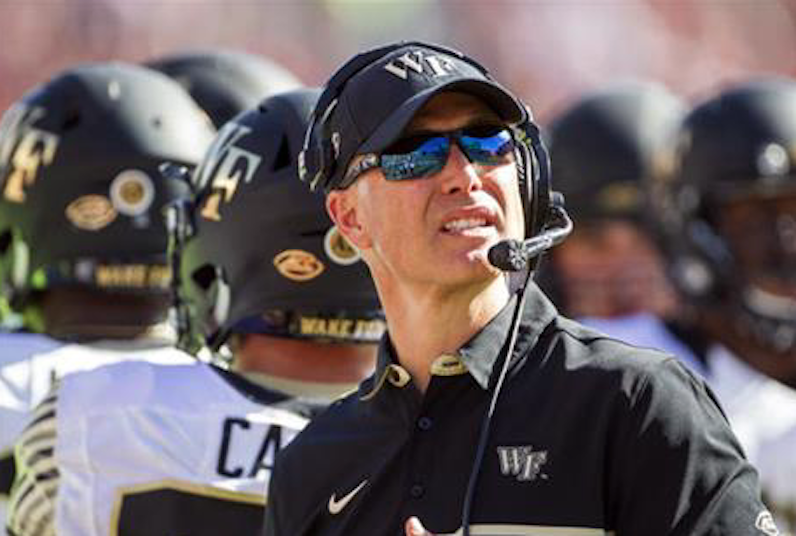 Normally, the dismissal of a third-string quarterback who had thrown 35 career pass attempts would not be cause for alarm.

Coach Dave Clawson kicked Kearns off the team earlier this week for a violation of team rules. That leaves the Deacons with three healthy quarterbacks on the roster.

Senior John Wolford and junior Kendall Hinton are battling for the top spot; Hinton holds the lead heading into the fall. While both have proven capable, they’ve also struggled to stay on the field.

Wolford has endured numerous hits over the last three years. The Deacons have finished near the bottom of the FBS rankings in sacks allowed all three seasons. Hinton is more of a runner, and that style puts him in jeopardy.

That’s why Clawson put such an emphasis on developing the third quarterback this spring.

Kearns, who would have been a redshirt sophomore, appeared to have that third-string spot won. He came to the Deacons as a flip from SMU after June Jones stepped down as coach.

Last season, Kearns had to play extensively in relief twice when injuries sidelined Wolford and Hinton. He started against Clemson, completing seven of 18 passes, and he played most of the second half against Temple in the Military Bowl.

His previous competition and now the No. 3 quarterback by default, Jamie Newman, also came to Wake Forest with a strong reputation. He ranked as the No. 16 dual-threat quarterback in 247Sports’ composite rankings.

Clawson offered faint praise of Newman after the Kearns announcement. However, it came across more as a man who was dealing with the hand he was dealt.

The Deacons have one more quarterback on the roster and another in the pipeline for 2018.

Tayvone Bowers will be a true freshman, but he suffered a knee injury near the end of his high school season; he’ll likely redshirt while rehabbing.

Sam Hartman, who plays his high school football in the Charlotte area, is committed to the program’s 2018 class. Hartman, although a little undersized, has been a prolific prep passer.

So the key for Clawson will be health. If Wolford and Hinton stay healthy, the Deacons are in excellent shape for the next several seasons. (Hinton will likely receive a medical redshirt, giving him three more seasons.) But if history repeats itself, the program could find itself turning to some very inexperienced players at the team’s most important position.