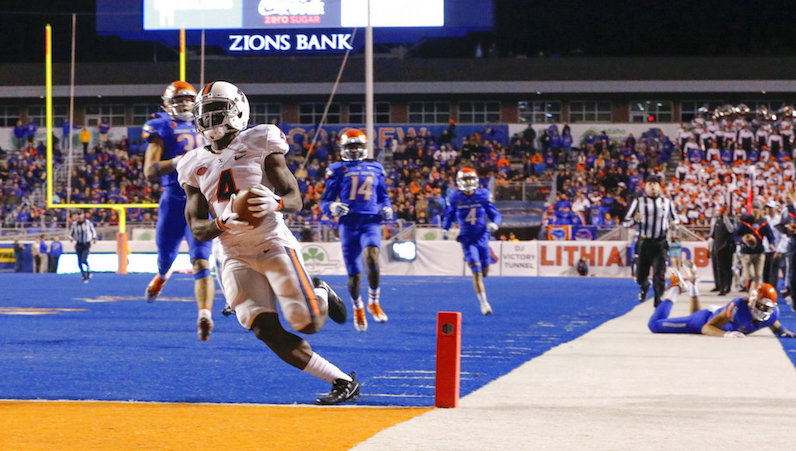 Virginia football running back Olamide Zaccheaus (4) scores a touchdown during the second half against Boise State in Boise, Idaho, on Friday, Sept. 22, 2017. Virginia won 42-23. (AP Photo)

Virginia’s blowout victory at Boise State last Friday may have signaled a step forward for the Cavaliers in Bronco Mendenhall’s second season at UVA.

Perhaps an even bigger sign that better days are ahead in Charlottesville was the fact the Cavaliers offensive and defensive depth charts for the game listed 36 freshmen and sophomores.

Not only is Virginia getting better, but several players recruited and/or developed by Mendenhall and his staff are out there making a difference.

That’s not the case everywhere, though

A notable exception, of course, is in the passing game. That’s an area in particular where the Cavaliers have excelled this season, ranking third in the ACC with 1,249 yards through the air. But quarterback Kurt Benkert and leading receivers Andre Levrone and Doni Dowling are among the seniors making huge contributions on offense.

Benkert, finally fully healthy for his last year of eligibility, has thrown for 10 touchdowns and just one interception while Levrone and Dowling both are in the top 10 in the ACC in receiving yards.

Levrone also leads the conference with 26.8 yards per catch.

The Cavs will have plenty of experience coming back at running back and along the offensive line next year, but if they are going to continue building positive momentum in 2018 they’ll need to find fresh blood in the passing game.

True freshman Lindell Stone remains No. 2 on the depth chart at quarterback, though he hasn’t taken a snap yet and Virginia may be trying to preserve his redshirt as long as Benkert stays healthy. Unless the Cavaliers add another graduate transfer in the offseason, the quarterback unit will be one of the least experienced around next season, consisting of Stone and incoming recruit Wyatt Rector, a three-star prospect from Florida.

The coaching staff really likes both players, but after finally finding some quarterback consistency this season, it could cause a bit of anxiety to go into next with absolutely no game experience at the position.

One thing that could alleviate that a bit is the presence of Olamide Zaccheaus, the third UVA player in the top 10 among ACC leaders in receiving yards. Zaccheaus will presumably be back for his senior season; his ability to not only get open down field, but make plays in the flat, could be a dream for a young quarterback.

Junior tight end Evan Butts is another player who could make life easier on either Stone or Rector next season, showing flashes of ability to break down defenses so far this year.

Younger wideouts such as Hasise Dubois, Terrell Jana and De’Vonte Cross are super athletes who haven’t gotten a lot of balls thrown their way this year, but should see their roles increase with time.

The Boise State win left the Cavaliers with a greater sense of excitement around the program than has been felt in quite a while, but as the youth movement continues in Charlottesville it will be interesting to see if success through the air continues into 2018 and beyond.

With David McCormack headed to Kansas, where does UVA look next?