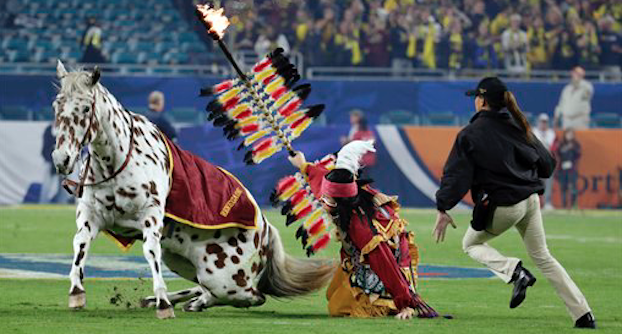 Florida State is a few home runs away from securing the top recruiting class. (AP Photo)

If there was a glaring weakness for an overall potent Florida State offense in 2016, it was the offensive line.

The good news for the Seminoles is that the unit improved tremendously as the season went on. Over FSU’s final three games, which included wins over top-10 defenses in Florida and Michigan, the Seminoles allowed just four total sacks and averaged 244 yards on the ground.

The question for Florida State’s offensive front heading into 2017 will be whether or not it can maintain that level of performance. Left tackle and two-time winner of the Jacobs Blocking Trophy, Roderick Johnson, is still up in the air on whether or not to return, and FSU will lose guard Kareem Are. There are also questions as to whether Landon Dickerson, who suffered an ACL injury in November, can return to form in time for next fall.

The offensive line was expected to be a strength in 2016 with all five starters returning, but that didn’t materialize. As a team, FSU allowed 36 sacks. That ranked just 106th in the country, but some of those were a result of quarterback Deondre Francois holding on to the football for too long.

If Johnson opts for the NFL, it appears as though every position will be wide open for 2017. Cole Minshew shined over the last three games and will be the front-runner to man one of the guard positions.

Alec Eberle started every game at center this past season, but he struggled mightily early on. He’ll probably be the front-runner with Ryan Hoefeld, Corey Martinez, Baveon Johnson and Andrew Boselli all hoping to challenge for time.

Dickerson’s health will be a big question mark for Florida State. A true freshman in 2016, Dickerson performed admirably at right guard, supplanting Wilson Bell, who started the year at the position after starting each of FSU’s 13 games in 2015.

Dickerson, by trade, is naturally a tackle. He has pinpointed a return from an ACL injury that will come between May and July, and if he is ready to go in time for fall camp, it’s possible that he could assume FSU’s left tackle position should Johnson leave.

Competition at right tackle should be between Brock Ruble and converted defensive end Rick Leonard. The two split time this season with Leonard holding down the position to end the year. Because of their struggles, it’s unlikely that both will start at tackle.

If the FSU coaching staff wants to keep Dickerson at guard, redshirt sophomore Abdul Bello and redshirt freshmen Josh Ball and Jauan Williams are also options to man that position. Derrick Kelly, who will be a redshirt junior, could also fill in at either guard or tackle.

Brady Scott is currently the only committed 2017 offensive lineman, but the Seminoles brought in six bodies at that position in 2016. The internal competition this offseason will be intense for FSU; that tends to be a good thing.

Perhaps what ultimately determines the potential of next season’s offensive line will be whether or not it can form a cohesiveness. In 2015, with a unit that was replacing four starters, FSU played five different combinations along the offensive front. In 2016, with all five starters returning, the Seminoles played seven different combinations.