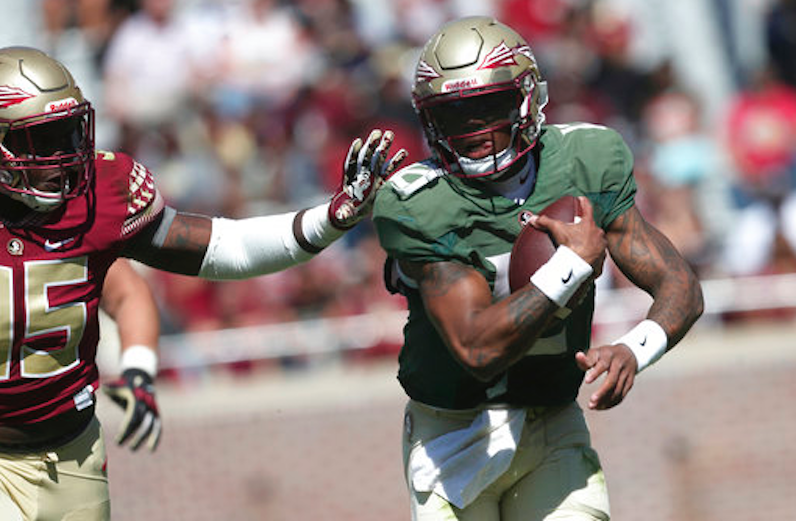 Deondre Francois (right) will need to take a step forward in 2017 if Florida State is going to compete for a national championship. (AP Photo)

More than four months of speculation will take place before Florida State takes on Alabama in one of the most anticipated openers in college football history. But for the Seminoles, the burning question is the same: Is this the year that FSU returns to the mountaintop?

As far as talent goes, Florida State looks to be in good shape. The Seminoles bring in four 5-star recruits with at least three of them likely to contribute right away. Those talented youngsters will add to a roster that includes last season’s leader in sacks among freshmen in defensive end Brian Burns, the reigning ACC Rookie of the Year in quarterback Deondre Francois and safety Derwin James — arguably the nation’s most versatile defensive player.

Under head coach Jimbo Fisher, acquiring championship-level talent has never been an issue. Fifty-three of the current 89 players on scholarship are former blue-chip recruits. Putting it all together, however, will be the challenge.

Replacing all-time leading rusher Dalvin Cook now looks to be one of the Seminoles’ smaller hurdles; junior Jacques Patrick and early enrollee Cam Akers made a major statement in the spring game. Francois, though, must shore up his issues with accuracy, anticipation and pocket presence.

The concerns for Florida State on the offensive side of the ball are mostly up front and at receiver. Along the offensive line, FSU started seven different combinations in 2016; the Seminoles need to be more cohesive as a unit up front this fall. The good news from the spring game was that redshirt freshmen Baveon Johnson, a center, and tackle Josh Ball both impressed, as did redshirt sophomore guard Cole Minshew.

Out wide, Auden Tate and Nyqwan Murray should be a very good top two at receiver. However, the three returning scholarship receivers aside from them — Da’Vante Phillips, George Campbell and Keith Gavin — have just eight combined catches for 72 yards in their careers. To offset that, FSU may go with more multiple-tight-end looks, utilizing the six scholarship players it has at that position.

Defensively, the line and secondary both look to be deep and outstanding. In the spring game last weekend, nine different players recorded a sack, led by Burns with three. The interior of Demarcus Christmas and Derrick Nnadi should be the best in the ACC. In addition, Josh Sweat, Jacob Pugh, Wally Aime and Janarius Robinson give defensive coordinator Charles Kelly a lot of versatility along the front.

The secondary also looked very good in the spring game despite being without three starters from last season in Marcus Lewis, Trey Marshall and the nation’s leader in interceptions, Tarvarus McFadden. James was all over the field for FSU while sophomore Kyle Meyers and early enrollee Stanford Samuels III shined.

Despite being as deep as it has been in years, Florida State’s linebackers unit still left something to be desired. Senior Matthew Thomas closed 2016 strong and is supposed to headline the unit. But among players like sophomores Emmett Rice, Dontavious Jackson, Sh’Mar Kilby-Lane and early enrollee Adonis Thomas, no one really stood out. Pugh, a senior, and Josh Brown both had decent games but were used mostly at the “BUCK” position.

For Florida State to get back to where it was in 2013, the talent is there. For it all to come together, however, Francois must improve, the O-line must find cohesiveness, receivers will need to step up, and the linebackers will have to be consistent. Staying injury-free will also be a key.

Like many elite programs, the Seminoles have national championship talent. However, they also must tie up the loose ends. The more they’re able to check off that list, the better off they will be.