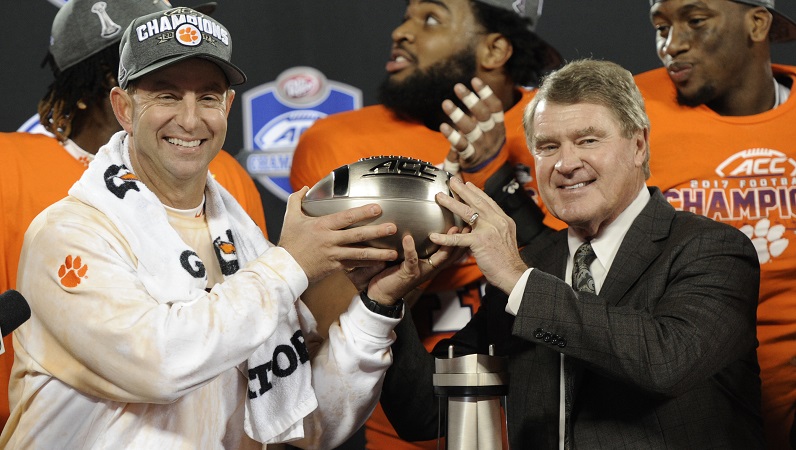 The Atlantic Division champion has claimed the trophy in the last seven ACC Football Championship Games (four by Clemson, three by Florida State), with Virginia Tech’s 2010 title the most recent by a Coastal Division Team.

Clemson extended its overall number of ACC football championships to a league-record 17, two ahead of Florida State’s 15. Four of the Tigers’ ACC championships have come in the last seven seasons under head coach Dabo Swinney.

Swinney’s four ACC titles are the most by any head coach since the ACC began determining its champion by a championship game format in 2005, and it ties for the sixth-most overall in the league’s 65-year history.

The Tigers scored the game’s first touchdown on a 10-play, 68-yard drive at the outset of the first period. Clemson has scored a touchdown on eight opening drives this season.

The Tigers have scored at least one first-quarter touchdown in each of their five ACC Championship Game appearances and two TDs in the opening period each of the last two years.

Clemson became only the second team to register multiple first-quarter scores against the Hurricanes this season. Virginia grabbed a 14-7 lead against Miami in the opening period at Hard Rock Stadium on Nov. 18 before the Canes rallied for a 42-28 win.

The Tigers’ 14-0 lead at the end of the first quarter was the largest in the history of the Dr Pepper ACC Football Championship Game.

The Tigers’ 21-0 lead at the 12:49 mark of the second quarter matched their largest in an ACC Football Championship Game (also last season vs. Virginia Tech and in 2011 vs. the Hokies).

Clemson has won 43 of its last 46 games dating to 2014. The Tigers have won 25 of their last 27 against ACC teams and 14 of their last 15 away from home versus league opponents.

Clemson’s senior class is the first in ACC history to win 50 games.

The Tigers (12-1) are the ninth team in ACC history to win at least 12 games. Last year’s Clemson team became the eighth when it posted a 14-1 record en route to claiming the national title.

With Saturday night’s win over the No. 7 Hurricanes, the Tigers extended their school-record winning streak against Top 25 opponents to 11 in a row. That is the longest active streak in the FBS an the longest in ACC history.

The defending national champion Tigers have won nine straight games against Top 25 teams away from home, including 5-0 this year.

Miami sacked Clemson quarterbacks four times, marking the ninth time this season that the Hurricanes have registered three or more sacks in a game this season. Miami entered the game leading the ACC in total sacks (42) and sacks per game (3.8) ….Joe Jackson’s third quarter sack gave the Homestead, Fla., sophomore 6.5 sacks on the year, good for second on the team.

Hurricanes kicker Michael Badgley’s fourth quarter field goal was the 76th of his career, good for fourth on the ACC all-time list … Badgley also moved into fourth place on the ACC career scoring list with 395 points.