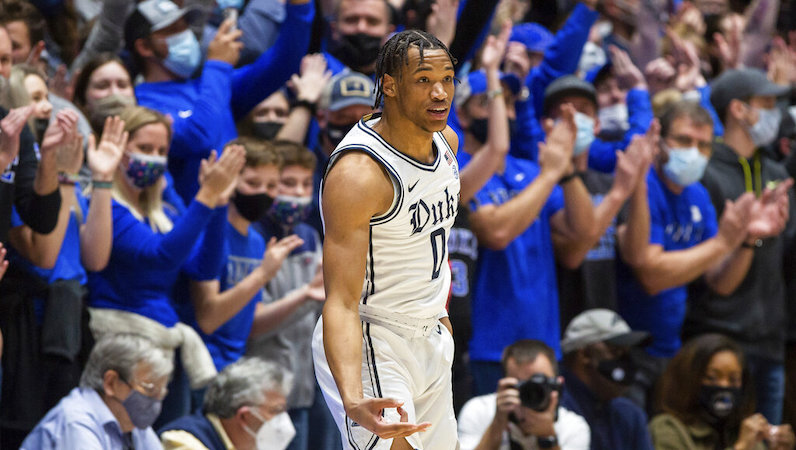 Duke basketball was scheduled to play Clemson this week (Dec. 29) on the road. However, that game is off the table due to COVID-19 issues within the program.

Following last week’s win over Virginia Tech, Duke players traveled home for the Christmas holiday. Upon returning to campus on Sunday night, the players underwent underwent rapid and PCR testing. According to a report from Adam Rowe at The Devils Den, multiple players tested positive for the virus.

NEWS: Duke not expected to play Clemson game due to multiple COVID positive test results in the program after the team returned from Christmas break https://t.co/35gNFgBr1U via @TheDevilsDen

The game with Clemson may be rescheduled, but for now, it’s been postponed as a cautionary measure, according to Rowe’s report.

Duke’s official account confirmed the news later in the morning.

NEWS: Our game at Clemson on Wednesday (12/29) has been postponed due to Duke's health/safety protocols.

Beyond the Clemson matchup, Duke was next scheduled to play Jan. 1 at Notre Dame. Currently, nothing has yet been decided regarding that game; however, that could change, too. The program will huddle up Monday (Dec. 27) morning and determine how to proceed.

Following Duke’s win over Elon on Dec. 18, head coach Mike Krzyzewski said that he and his staff had all received the booster shot. Assistant coach Nolan Smith tested positive for COVID and wasn’t on the bench for the wins over Elon and Virginia Tech. Smith is believed to be out of quarantine, though.

The entire Duke team will follow the coaching staff and receive their booster shots before the end of January, which will track with university-wide policies.

Through the first dozen games of the season, the Blue Devils are 11-1 and feature one of the top offenses in the country, led by Wendell Moore Jr., Paolo Banchero and AJ Griffin.

In the middle of a breakout season, Wendell Moore Jr. adds new tricks to his game