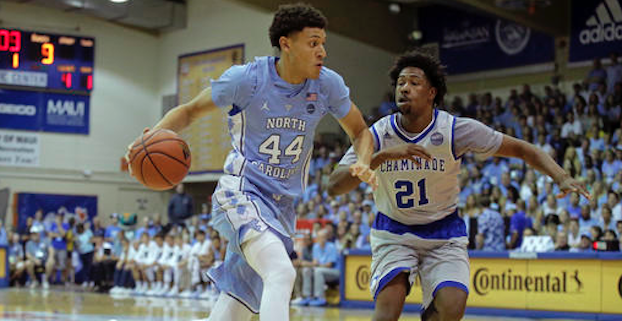 Justin Jackson (44) is among this year's front-runners for ACC Player of the Year. (AP Photo)

North Carolina came within an eyelash of a national championship in 2015-16 on the strength of a powerful offense. The Tar Heels led the nation in field goals, offensive rebounds, total rebounds and points on their way to the NCAA title game.

This year, the Tar Heels are shooting much better from long range. They are shooting a collective 37.8 percent from three-point land — an improvement of more than five percentage points from last season.

After making just 224 three-point attempts in 40 games in 2015-16, Carolina is on pace to easily exceed that total this year. So far, the Heels have knocked down 90 shots from long range in 13 outings.

After making 5.6 attempts per game last year, the Tar Heels are converting 6.9 three-pointers per game this season — a healthy improvement of nearly a conversion and a half per contest. Less than 21 percent of North Carolina’s total points last season came from beyond the arc; that’s jumped to 23.7 percent in 2016-17.

Five different UNC players — Justin Jackson, Joel Berry, Kenny Williams, Nate Britt, and Brandon Robinson — have taken at least 20 three-point shot attempts. These are the only five Tar Heels averaging at least one three-point shot per game. Jackson leads the team with 72 attempts, while Berry is next with 55 attempts.

No Tar Heel shot 40 percent or better from distance last season. Berry shot 38.2 percent from three-point range a year ago, while Williams was just 1-of-13 — 7.7 percent — in a small sample.

Jackson has also improved considerably, going from a 29.2 percent average a season ago to 37.5 percent this season. Luke Maye has also provided a spark, making 44.4 percent (4-of-9) of his three-point attempts.

The Tar Heels had three players last season — Berry, Jackson and Marcus Paige — average three or more three-point attempts per game. This season, only Jackson and Berry are above the three three-pointers per game average, though Williams (37 attempts in 13 games) and Britt (36 attempts) are close.

If the Tar Heels can continue their improved outside shooting in ACC play, another ACC regular-season title isn’t out of the question.