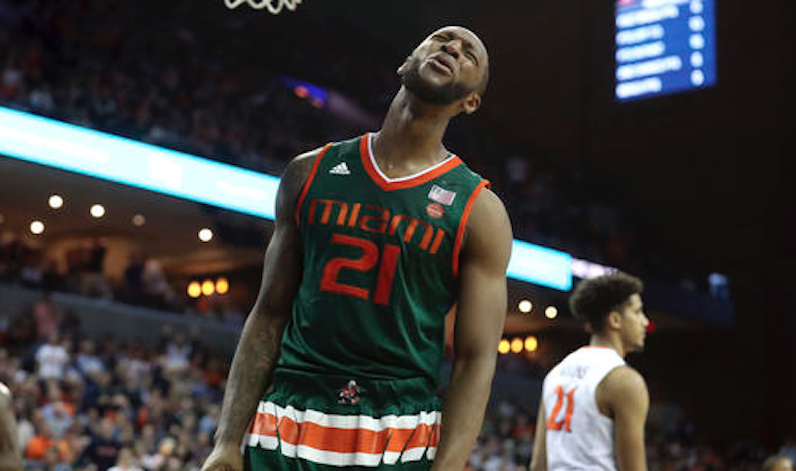 Kamari Murphy and Miami can firmly position themselves for an NCAA tournament bid with a couple more wins. (AP Photo)

As thrilling as Monday’s win over Virginia was, Miami isn’t a lock for the NCAA tournament at this point.

A near-lock, perhaps. That in itself is quite a story.

The Hurricanes have done incredibly well given the state of the roster. Entering Saturday’s game at Duke, UM won its last three games without starting point guard Ja’Quan Newton (suspended) and playing a rotation of seven, three of them freshmen and two of them sophomores. It’s another outstanding coaching performance by Jim Larranaga, who remains one of the best in the country. Before the season, it was anyone’s guess if the Hurricanes would make the tournament, despite the talent on their roster. It was hard to see them getting in when dismissals, discipline and injuries started to get in the way.

Now, about that résumé:

The selling points for Miami are its record, 19-8, and its lack of bad losses (the lowest RPI team to beat them is Syracuse, which was No. 78 as of Thursday and is on the tournament bubble). Miami is 37th in RPI. No, the strength of schedule doesn’t help, nor does the fact that before beating No. 18 Virginia on the road Monday, UM was 1-4 against teams in the Top 25.

Taking down the Cavaliers in Charlottesville helped, giving UM another sparkly jewel — a Jan. 28 home win against North Carolina being the other — to place atop its crown. But going 0-3 from here would mean the Canes probably have to win once more to remove any doubts lingering on the selection committee.

Miami finishes up with Duke, 12th in RPI, before hitting the road twice. Virginia Tech (36th) and Florida State (13th) are not friendly places to play, and if the Hurricanes look bad in those games, it could cause observers to view the Virginia win as a fluke over a backsliding team (the Cavs have lost four in a row), rather than the sign of a tough-minded road squad.

Winning a game or two in Brooklyn at the ACC Tournament would be a chance for the Hurricanes to jettison those feelings, but the bet is that even if the Canes lose out from here, they’ll look good enough doing so that, in a rollicking year for ACC road teams, the committee won’t dock them.

And there’s a great chance they beat Duke. After all, Larranaga’s done it before.