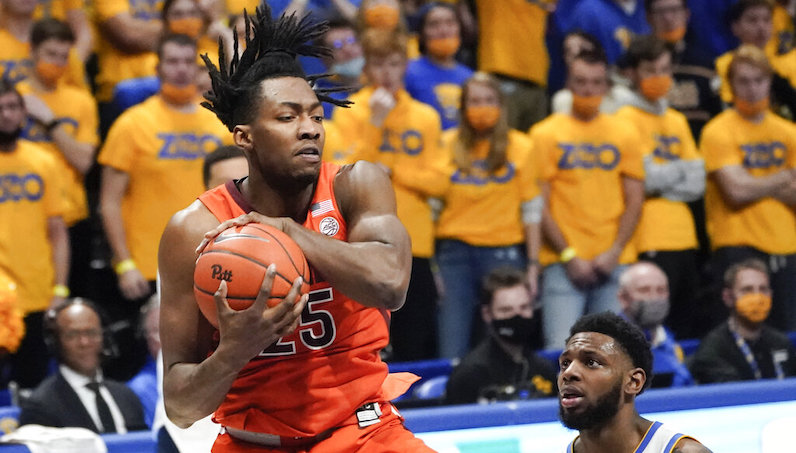 Virginia Tech's Justyn Mutts, left, gets a rebound in front of Pittsburgh's John Hugleyduring the second half of an NCAA college basketball game, Saturday, Feb. 5, 2022, in Pittsburgh. (AP Photo/Keith Srakocic)

Virginia Tech basketball has dropped only one game in the month of February. Following a blowout win over Louisville, the Hokies are now 19-11 (11-8 ACC) and clinging to the NCAA Tournament bubble.

Currently, Virginia Tech ranks 37th nationally in the NET, which is actually the second best ranking for any ACC program. North Carolina is No. 40. Wake Forest is No. 42.

The Hokies feature an offense that ranks 20th nationally in efficiency. Mike Young’s club also sits inside the top 20 in 3-point percentage (39.2 3P%) and effective shooting (55.1 eFG%). There are a variety of metrics that make note: this is a good basketball team, with incredible collective shooting.

However, the Hokies are just 1-5 in Quad 1 games, at the moment. The lone win came over the weekend, at Miami: a thrilling comeback, with Virginia Tech winning 71-70. Young’s team also has two Quad 3 defeats: Boston College and NC State.

As of right now, VT is on the outside looking in — for the NCAA Tournament. Bracket Matrix shows the Hokies landing in only a handful of brackets. ESPN’s Joe Lunardi has the Hokies close, yet so far; Virginia Tech currently sits in his “Next Four Out” category.

Led by Keve Aluma and Justyn Mutts, the Hokies will close the regular season out this Saturday (March 5) at Clemson. This matchup serves no real purpose in terms of resume building; however, VT must still take care of business.

Obviously, there are no guarantees, but the 2022 ACC Tournament may offer some help.

Read More on Virginia Tech Basketball and the ACC

More on the 2-point efficiency of Aluma vs. Miami