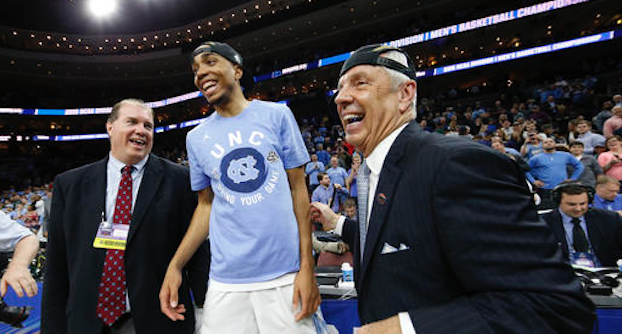 Former NBA and UNC big man Brendan Haywood, now an analyst with CBS Sports, stopped by The David Glenn Show on Wednesday to talk about his Final Four experiences and what he sees in this year’s Tar Heel team.

The 7-footer was one of many former North Carolina players who was back on campus this past summer to play pickup with the current UNC team. One player in particular Haywood competed against was Brice Johnson, and during the interview, he was asked about the senior’s development leading up to this season. His response:

What impressed me the most was how he grew as a player and how he grew as a person. The one question I think Roy Williams always had for Brice was his effort. He wanted him to consistently give a high level of effort. You’ve seen in some of the interviews, he was like ‘I want you to have that same effort every night that Tyler Hansbrough kind of had for us.’ And now you’re seeing it. Now that he has that effort every night in and every night out, it’s a double-double every night. This guy has had over 20 double-doubles on the season. It’s been phenomenal. I’m so proud of his growth. I worked out with him and against him all summer. I knew he was going to do big things this year. I didn’t know it would be this big, but I’m very proud of Brice Johnson. I love what he’s done this year. It’s been a pleasure to watch him play, man.

My main thing was that I just didn’t think Coach K handled it in the right fashion. I respect Coach K as a basketball coach. I even said on The Doug Gottlieb Show that I think Coach K is probably one of the best basketball coaches of all time. I talk about how he has totally changed his offensive set and his defensive philosophy and what a great job he’s done with this team, playing zone because they were so thin even though he hates to play zone.

I respect him to the utmost; I just didn’t think he handled that situation well. Every coach will tell you it’s an unwritten rule — “Don’t talk to my players.” He had a similar situation I think with Zabian Dowdell at Virginia Tech when they got upset a couple years ago where he was like, “You’re too good of a player to be doing this, that and the third.” Coach K gets 95-99 percent of the things right. Sometimes he gets those types of situations wrong, and that’s not your place. Your place isn’t to coach another player. If the other team’s coach wants to say, “Hey, son, we don’t act like that,” that’s on them.

I know Dean Smith sometimes would pull me to the side, even when he retired, I might get a dunk and be cutting up in the camera, and he’d say, “Hey, just remember, a lion never growls after the kill.” And that was his message to me, but it wasn’t for the other team’s coach to say it. It wasn’t for Coach K to say it to me. It was for Coach Smith. So I think Coach K just got a little out of sorts, and he was not in his place. He’s a great coach and does a lot of things well, but he was out of place. Especially when you look at what’s going on with Grayson Allen. I didn’t see him publicly criticize Grayson Allen about being too good for clipping people, and somebody can get hurt doing that. I was just like, hey, no matter how great you are, you always have to stay in your lane. A lot of Duke fans didn’t like it, but you know what? I don’t care. It is what it is.