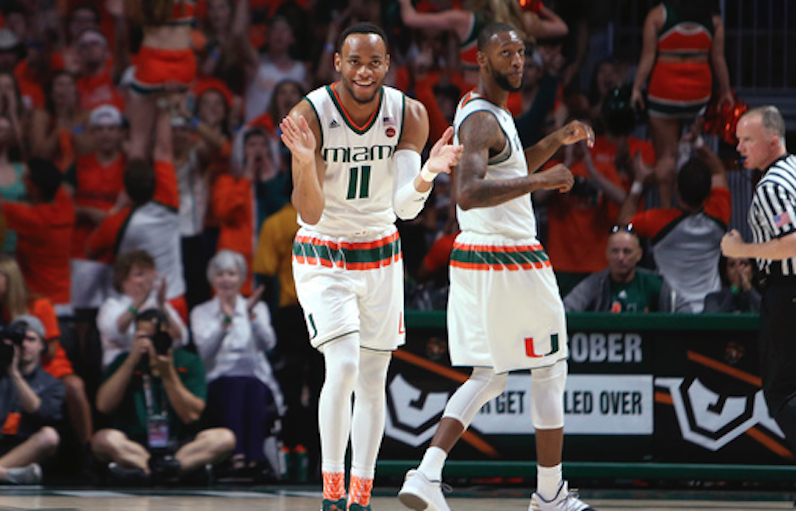 Bruce Brown (11) would be one of the ACC's top returning players should he come back to Miami next season. (AP Photo)

Plant yourself a decade in the past and start looking forward. From this spot, 10 years ago, picture an ACC team that would play in two Sweet 16s in four seasons, would make 20-win campaigns a near-annual occurrence and would sign back-to-back top-10 classes featuring a combined three All-Americans.

You’d probably imagine you’d be thinking about Duke or Carolina, right? Or maybe NC State or Wake Forest has emerged as a consistent threat?

That’s the résumé Miami has now, and as strange as it would have been to think about 10 years ago, the Hurricanes are just getting started.

Jim Larranaga has authored a remarkable run in Coral Gables, for decades a basketball cold planet with brief blips of activity. Now the Hurricanes should be on everyone’s radar. In this so-called rebuilding year, UM has found 20 wins again — 10 in the ACC — and is looking like it’ll be a tough out in the tournament.

The real point here: Larranaga is just getting started.

That is a considerable amount of talent. For that reason, Hurricanes fans are thinking that whatever their team does this year in the NCAA tournament will be gravy.

Miami will lose reliable, versatile 1,000-point scorer Davon Reed and energetic power forward Kamari Murphy to graduation. There also exists a chance Brown, who has become Miami’s best player and would be a front-runner for ACC Freshman of the Year if not for NC State’s Dennis Smith Jr., will declare for the draft.

But if Larranaga can convince Brown to stay — the argument being, he would boost his NBA stock to lottery status by proving he can run the point for a championship-caliber team — he’ll have a heck of a squad in 2017-18.

Brown would run the point, with Lykes backing him up and senior Ja’Quan Newton able to play on or off the ball. Walker, the dynamic, speedy high-flyer, would play the 2-spot, with Vasiljevic coming off the bench. Anthony Lawrence Jr., a junior, becomes the 6-7 wing who can guard four positions, play inside or outside and rebound. Waardenburg (6-9) is a bit of an unknown, but he could give UM minutes; it helps he enrolled midyear and is redshirting, and thus able to work out. At the 4, Huell (6-10) has immense physical gifts and is developing his game, and there will be no need to rush Gak (6-10). The center spot, with a bulkier, junior version of Izundu (6-10) and a slimmed-down Miller, would feature one of the better tandems in the ACC.

This year’s lineup is young and talented, and next year’s roster would be a little older and even more talented — perhaps enough to win it all.

Yes, at Miami. Who would have guessed?