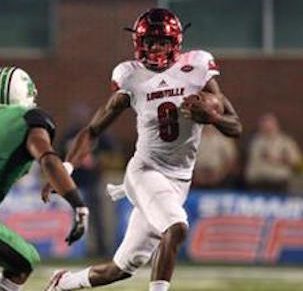 Lamar Jackson has scored 25 touchdowns through the first four games of the season. (AP Photo).

The ACC will take center stage Saturday evening in prime-time as No. 5 Clemson hosts No. 3 Louisville. It will be the second time in three weeks that two top five ACC schools have faced one another, and just the fifth time in the history of the conference that’s occurred. ESPN’s College GameDay will be in town, and the preamble of an entire day of college football will lead up to the 8 p.m. kickoff, which should only add to the level of excitement.

This game will also pit two of the best players in college football against one another. Once the game gets started, Lamar Jackson and Deshaun Watson won’t be on the field at the same time, but you can bet that their performances Saturday night — fair or not — will be stacked up against one another. Before that, though, it’s worth taking a snapshot of how 2016 has gone for this dynamic pairing of quarterbacks. Despite a 4-0 record, it’s no secret that the Tigers have gotten off to somewhat of a slow start in, at least on offense. Running the ball has been an abject challenge, and the passing game — even with wide receiver Mike Williams back in the fold — has lagged behind its lofty preseason expectations.

To read more on the match-up between Deshaun Watson and Lamar Jackson, sign up for basic access to ACCSports.com.