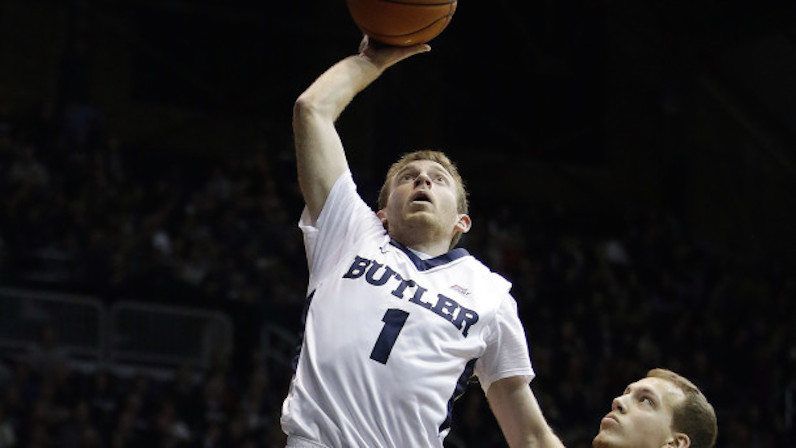 Tyler Lewis has connected on nearly 61 percent of his two-point field goals as a senior. (AP Photo)

When North Carolina meets up with Butler in the Sweet 16, Roy Williams and the Tar Heels will recognize a familiar face. Former NC State point guard Tyler Lewis, who has made 23 starts this season, is one of the key components of Butler’s rotation.

During his two seasons as a member of the Wolfpack, Lewis faced the Tar Heels four times and played three minutes in NC State’s 2013 victory over North Carolina — the program’s first since 2007. But seeing how it has been a few years, let’s take a look at the new and improved Tyler Lewis.

Do not expect Lewis to set scoring records against UNC; the fifth-year senior has scored in double figures just six times this season. However, he has become a quality pass-first point guard. According to KenPom, Lewis ranks 38th nationally in assist rate. When he is on the floor, he assists on 32.5 percent of the team’s made field goals.

This should not come as much surprise, though. In a smaller sample, Lewis ranked first in the ACC during conference play in 2013-14 with an assist rate of 34.3 percent, per KenPom.

He does not shoot often, but when he does…

Butler’s roster features seven players who have played at least 500 minutes this season. Of that septette of players, Lewis ranks last in usage rate. According to Sports-Reference, Lewis uses just 14.8 percent of Butler’s possessions when he is on the court.

When he does shoot, though, Lewis is pretty accurate. Lewis connected on 60.8 percent of his two-point field goals this season, which ranks No. 106 in the nation. He has also shot a career-high 40 percent on three-pointers. That accuracy has helped him average a career-best 6.5 points per game.

If you leave him open, Lewis is as precise as anyone UNC has faced all season. According to Synergy Sports, he connected on 50 percent of his “unguarded” catch-and-shoots this season. He scored 1.5 points per possession, which ranked seventh in the Big East, per Synergy.

It is a pick-and-roll world

Like any point guard with a pulse, Lewis spends a great deal of his time on the floor in pick-and-roll action. He seems to have found his calling here, too.

He has a tendency to turn the ball over a little too much here — 21.4 percent turnover rate, per Synergy — but Lewis ranks No. 6 in the Big East in offensive efficiency as a shooter out of pick-and-rolls. Lewis scores one point per possession while shooting 55.3 percent on such action.

As a passer, though, Lewis has been even better. He ranks No. 38 nationally in points per possession when he passes to a roll man on pick-and-rolls, according to Synergy: 1.3 points per possession, 61 percent shooting. Tyler Wideman, Kelan Martin (Butler’s leading scorer) and Nate Fowler have all scored more than 20 points as rollers this season for Butler.