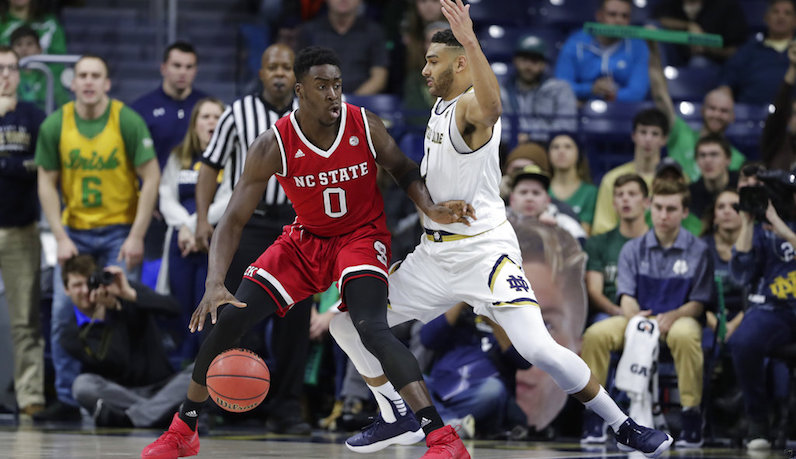 After Wednesday night’s loss in chilly South Bend, NC State fell to 0-2 in the ACC. NC State is playing shorthanded at the moment, but the 30-point loss to a Notre Dame team without Bonzie Colson is a bit of a wake-up call.

The Wolfpack scored a dismal 0.83 points per possession, according to KenPom; this is what happens if a team commits 15 turnovers, goes 6-of-18 on three-pointers and just 8-of-15 from the free throw line.

NC State still ranks 65th in the nation in adjusted offensive efficiency (109.8 points per 100 possessions), per KenPom, which is still pretty good. However, in ACC games, that’s dropped to just 83.6 points per 100, third-worst in the ACC. The Pack has connected on just 27.5 percent of its three-pointers (11-of-40)in league play, and the team’s effective field goal rate of 40.1 percent ranks last in the league.

Lennard Freeman and Omer Yurtseven are having really nice seasons playing in the middle for Kevin Keatts. Unfortunately, a lack of shooting, playmaking and experience on the perimeter is handcuffing this offense.

NC State has, in fact, been rather efficient on offense around the basket. On pick-and-roll possessions, roll men have scored 1.23 points per possession (56.5 percent shooting), according to Synergy Sports, which ranks 36th in the nation. This is where Yurtseven has really stood out: 1.49 points per possession, 67.6 percent shooting. NC State rollers have scored 96 total points this season, No. 1 in the ACC.

On post-up possessions, NC State has found success, too. Led by Lennard Freeman (1.22 points per possession), the Pack is shooting 54.1 percent on post-ups in 2017-18, per Synergy. That’s second-best in the ACC — behind only Colson-led Notre Dame.

State ranks 13th nationally in terms of offensive rebound rate — grabbing over 36 percent of their misses, according to KenPom. And while they aren’t exactly Marvin Bagley and Wendell Carter, Yurtseven and Freeman have used these opportunities to create instant-offense.

On put-back attempts following an offensive rebound, NC State has scored 1.26 points per possession on 65.9 percent shooting, per Synergy — behind only Virginia (67.7 FG%) and Duke (67 FG%). Freeman and Yurtseven are a combined 29-of-42 on put-backs: 69 percent. (As good as that is, it’s not ideal if your most-efficient offensive possession starts with a missed shot.)

The struggles, however, exist when the shot range extends beyond the frontcourt’s wingspan.

Now, for the more painful numbers. It was clear, after the departures of Terry Henderson and Maverick Rowan, that this team would likely struggle shooting from distance. So far, that’s hit home.

NC State has made under one-third of its three-point attempts — 33.1 percent, which ranks 240th in Division I basketball. Over 43 percent of Al Freeman’s field goal attempts are of the three-point variety; he’s attempting nearly six threes per game, and shooting just 30.3 percent from downtown. Freshman point guard Lavar Batts is just 6-of-26 on three-pointers this season.

The lack of shooting creates spacing issues for the Wolfpack; opponents can also zone this team, and make sure that Lennard Freeman and Yurtseven see nothing but a forrest of arms and limbs when they have the ball.

Braxton Beverly and grad transfer Sam Hunt have offered some help here. Beverly has scored 59 points on 56 spot-up possessions, per Synergy; Hunt has scored 1.17 points per catch-and-shoot attempt (No. 13 in the ACC). However, neither has been very efficient, and Beverly is tasked with more playmaking responsibilities with Markell Johnson suspended indefinitely.

Beverly has put forth a couple great games for NC State, so far, like the win over then-No. 2 Arizona. But he’s on the smaller end of the basketball height spectrum, and he’s just a freshman. It’s a lot to ask.

Dennis Smith Jr. was the kingpin of the pick-and-roll game in the ACC last season; DSJ is now an employee of the Dallas Mavericks, though. NC State’s newest batch of point guards, however, are struggling with the action.

Before his suspension, Johnson shot just 36.4 percent and posted a gaudy 35.7 percent turnover rate out of the pick-and-roll, per Synergy. Al Freeman hasn’t been much better: 35.7 percent shooting; same for Batts — 29.4 percent. According to Sports Reference, Freeman is one of just 21 Division I players shooting under 35 percent from the field on at least 10 attempts per game.

Beverly has scored just 0.56 points per possession as a pick-and-roll ball handler, according to Synergy. There are 29 ACC players that have used at least 30 pick-and-roll possessions this season. Beverly and Johnson rank 27th and 28th, respectively, in offensive efficiency on those possessions, per Synergy.

Things were likely to be tough for the Pack on offense this season, and the schedule doesn’t get any easier. NC State gets to come home, but the team’s next two games are against top-25 foes: Duke and Clemson. There’s still some stuff for the Wolfpack to get at, though.

This team knows it has efficient and experienced post scorers that can, like, do things well around the basket. It’s important to have an identity and know what works. However, Keatts and NCSU will need to get more clever at finding ways to get those guys the ball, or force turnovers and improve a slumpy transition offense (1.01 points per possession).

As far as the backcourt goes, this is all valuable experience for guys like Beverly and Batts. Hunt and Freeman will depart after this season; Johnson’s career is in jeopardy as he faces felony charges. The ACC can be a cruel place to learn on the fly, but this is an opportunity to build reps.

Inside The Playbook: The effectiveness of Omer Yurtseven and the drag screen