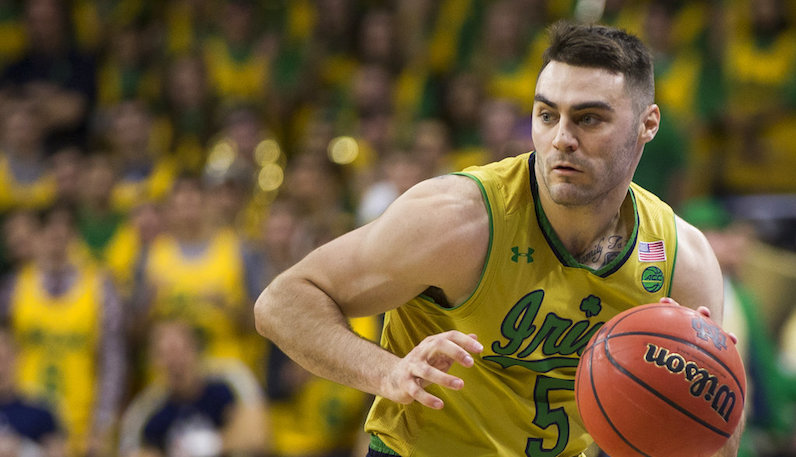 After missing three games in the middle of January — a win over Syracuse and losses against Georgia Tech and North Carolina — Matt Farrell will miss more time for Notre Dame.

Mike Brey says they are shutting down Matt farrell indefinitely. Had mri on ankle. Showed a bone bruise. Will definitely miss the next two games. They they will evaluate from there.

Notre Dame is already without its All-American forward, Bonzie Colson; his absence has caused all kinds of issues for one of the best offenses in college hoops. No Matt Farrell handicaps the Irish even more.

Farrell is shooting 37.1 percent on three-pointers this season, and he ranks 94th in the nation in assist rate — assisting on 29.4 percent of his teammates’ made field goals while on the floor, per KenPom.

Freshman forward D.J. Harvey, a promising player, is also out for the next few weeks, too, with bone bruise on his left knee.

The senior point guard is one of the best pick-and-roll players in America, too. According to Synergy Sports, Farrell is shooting 43.5 percent (50.6 effective field goal percentage) and scoring 0.84 points per possession — No. 11 in the ACC.

Over 42 percent of Farrell’s possessions are as a pick-and-roll ball handler, which is the highest share in the league. Ky Bowman of Boston College is the only ACC player to have score more points out of the pick-and-roll this season, per Synergy.

Matt Farrell is a dynamic shooter off the ball as well; within the confines of Notre Dame’s screen-heavy offense, Farrell scored 1.35 points per possession coming off screens this season. That’s good for No. 16 in the nation. Farrell has also shot 44 percent (60 percent effective field goal rate) on spot-up possessions, too, according to Synergy.

Sophomore guard Temple Gibbs will be asked to run the point more for Notre Dame. With Farrell on the mend, Gibbs has played 62 percent of Notre Dame’s point guard minutes the last five games, per KenPom.

A band without its lead singer: How Notre Dame adjusts to life without Bonzie Colson