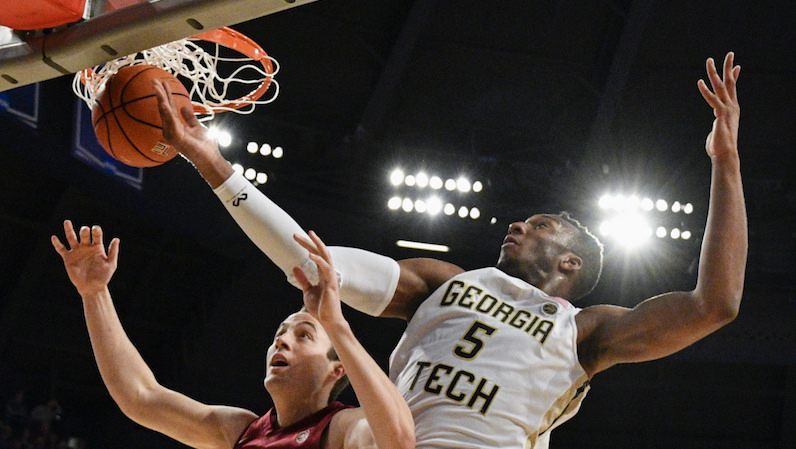 Outside of Dennis Smith Jr. and Jonathan Isaac — two likely top-10 picks in this year’s NBA Draft — only one player is more of a lock to make the All-ACC Freshman team, and he’s surprising candidate: Georgia Tech’s Josh Okogie.

He wasn’t a blue-chip recruit, like Smith and Isaac, but Okogie is here now, and he’s taking the league by storm.

To say there wasn’t much expected of the Yellow Jackets this season is probably putting it mildly; Tech, however, is sitting at .500 in league play (4-4) with wins over North Carolina, Clemson, NC State and now Florida State.

The Yellow Jackets even scored a nonconference victory in December over VCU. First-year coach Josh Pastner has already blown the doors off of the team’s marginal preseason expectations, and Okogie has been one of primary driving forces of that success.

Despite his inexperience, Okogie hasn’t been shy; the rookie is 14th in the ACC in field-goal attempts (228), and along with Smith, he’s the only freshman inside the conference’s top 20 in scoring (15.6 points). According to Sports-Reference, Okogie uses a team-leading 28.1 percent of Georgia Tech’s possessions while on the floor.

One of the reasons Okogie has paired so nicely with Paster is his ability as a cutter. Pastner brought his dribble-motion offense from Memphis to Atlanta. This is an offense that’s heavy on post players setting wide pindown screens for wings and then running flare and back screens off of that initial action. Sometimes, a screen isn’t even necessary — multiple times against Florida State, Okogie smoked defenders backdoors for layups. Props to Josh Heath, who slipped two gorgeous passes into tight windows for Okogie on these plays — the second of which led to an and-one that put the Yellow Jackets up 25 points and had McCamish Pavilion buzzing louder than it has in a long time.

According to Synergy Sports, Okogie shoots 84 percent and scores 1.74 points per possession off of cuts. That’s good for 16th in the nation and No. 1 in the ACC among players with a minimum of 30 possession finished with a cut.

Okogie isn’t a one-trick pony, though. He’s shooting a respectable 35.9 percent from downtown. The freshman has found more success, unsurprisingly, on catch-and-shoots: 12-of-30 (40 percent), according to Synergy. He also draws a bunch of fouls — 6.6 per 40 minutes, per KenPom.com. That’s a good thing, too, because he ranks 18th in the conference in free-throw percentage (76.6 percent) and third in makes (98).

In that upset over Florida State, Okogie scored 35 points on 17 field-goal attempts, while snagging 14 rebounds and dishing out five assists. Okogie, alone, actually outscored the Seminoles in the first half, 17-15. This win marked the second time this season Okogie has scored 35 or more points — the other performance came last November in a win over Tulane. He’s only 20 games into his college career, but Okogie has scored 10-plus points in all but four games.

Georgia Tech will have ups and downs this season; defeats to Duke and Virginia got ugly, and the team is dead last in conference play in offensive efficiency, according to KenPom. However, it’s time to focus on the positives: Okogie’s career at Georgia Tech has just started, and if the beginning is any indication, then Pastner has found the ideal wing to construct his offense around in Atlanta.